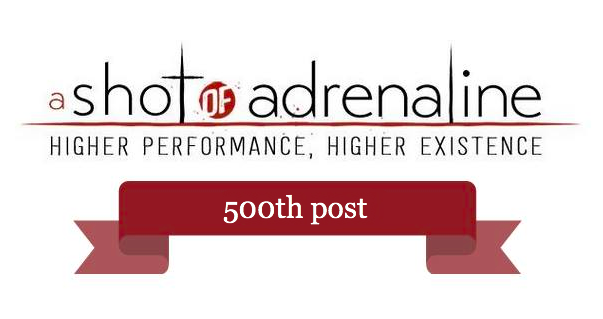 Today marks a huge moment in my life.

For most of my life I’ve been a leaf floating in the wind. I did something until I became bored and then I moved on. I never gave anything a chance to work, whether it was fitness, business or schooling.

In this post, I’d like to remind you how far we’ve come, and share with you where I plan on going with both the site and my own calisthenics training.

The History of the SOA Site

You may have thought that SOA was the first website that I started, but when I was in Nursing school, I started a site called SourceofVitality.com (someone else owns that URL now).

Here’s a screenshot of that site: 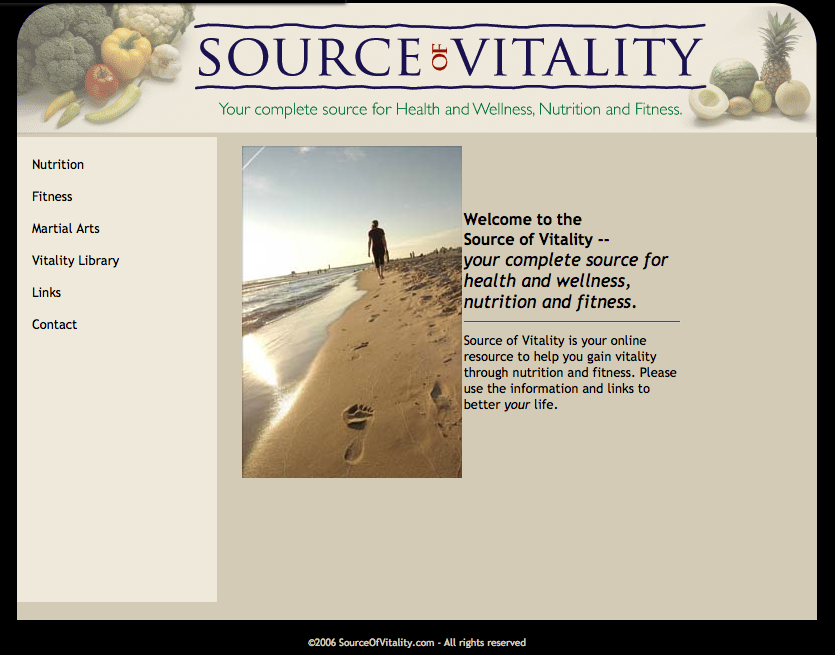 I started Source of Vitality in 2006. I had a lot of knowledge to share and this was my outlet.

A few months after starting it, I asked my professor, Dr. Hamilton, what she thought of it. Her email reply hit me like a brick.

“Todd, you have no authority to start a website like this. You have no credentials and don’t know what you’re talking about. You have ADD and need to get focused. Shut the site down and focus!”

What?! How could she say this?! I became defensive.

“My website is helping people! How could you say that?!”

The truth is that not many people were visiting the site. I soon lost interest and just left the site collecting dust.

A year later, I wanted to see if anyone had been visiting the site. To my surprise, thousands of people were visiting! The most popular section was the bodyweight exercises. I wondered where these people were coming from, so I checked the stats.

Some GIF clips that I’d created to demonstrate certain exercises had been shared in hundreds of Chinese and Indian forums. It was so bizarre seeing a bunch of Chinese text and then a moving GIF image of me doing dive-bomber push-ups.

My jaw hit the floor. I knew I had something special.

I was in the middle of my studies, so I didn’t act on it. However, I always kept this tidbit of knowledge in the back of my mind.

In the summer of 2011, my passion for teaching bodyweight exercises grew. I knew I had something special, and I felt obligated to share it with the world.

I started a site called Extreme-Exercises.com. 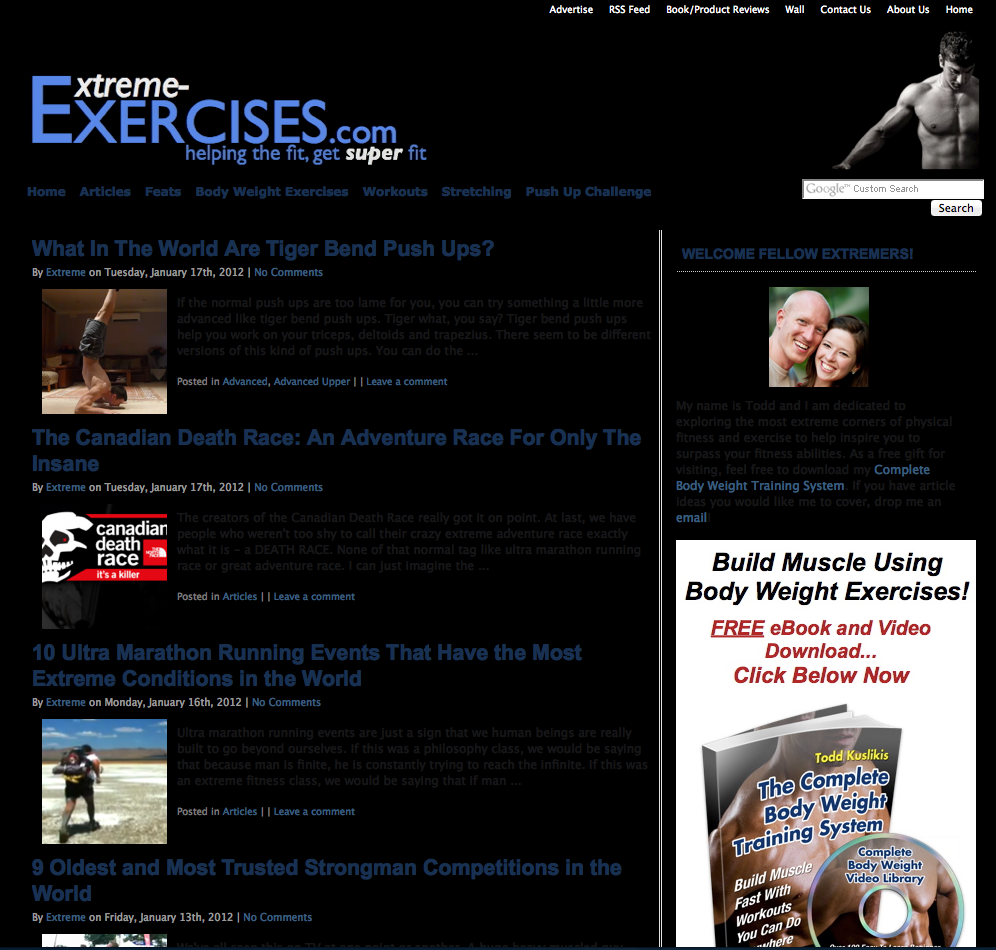 I used the Wayback Machine to find a screenshot of the old site. It didn’t have a black background, so I’m not sure why it came up like this.

After working on the site for around 10 months, I was blown away. The site continued to grow and had reached about 750 visitors each day. I thought to myself, “Maybe this could be a business.” I’d always dreamed of being an entrepreneur.

After doing quite a bit of research, I found a guy named Corbett Bar. He ran a website called ThinkTraffic.net, which has now turned into Fizzle.co.

I worked with him directly, and he helped me rebrand. A Shot of Adrenaline was born. The name was catchier and encompassed more than just exercise, which is where I wanted to head.

I hired someone on Elance.com to design the site. Regretfully, I went for beauty over readability.

Here’s the design. A lot of you have followed me for a while and will remember this version. 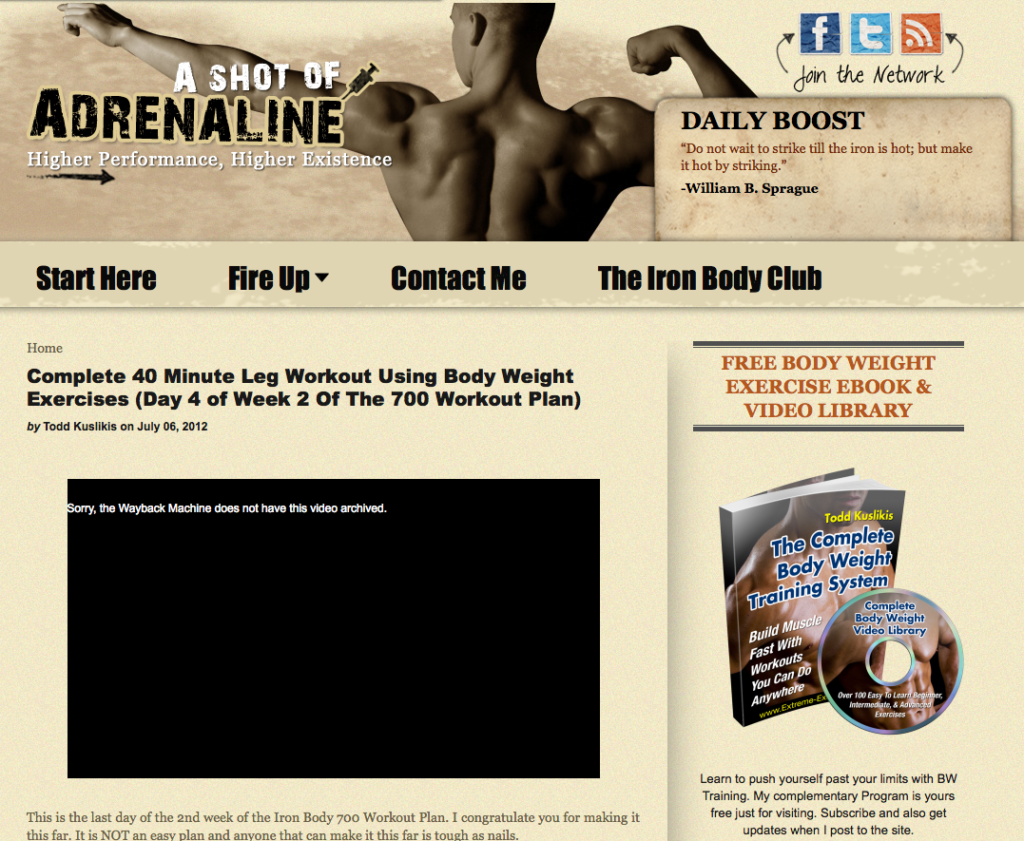 In March 2012, I officially switched over to AShotofAdrenaline.net.

Visitor numbers continued to grow and we’re now up to about 4000-5000 a day. I’ve been blown away by this and I can’t wait to see what the future holds.

Here are the stats from the switch-over until now:

I knew the content on the old SOA site was hard to read. It was hard to read for me and for you. I know this because many of you told me. I’d wanted to redesign the site for a while, so as to make the main purpose of the site more readable and accessible.

In April 2014, my wife and I prayed about redesigning the site. After prayer and discussion, we knew it was time. I was excited.

I knew exactly who I wanted to redesign the site. Her name was Mindy and she created the BodyweightBundle.com. She is highly skilled at designing.

We went through many versions and finally released what you see today. 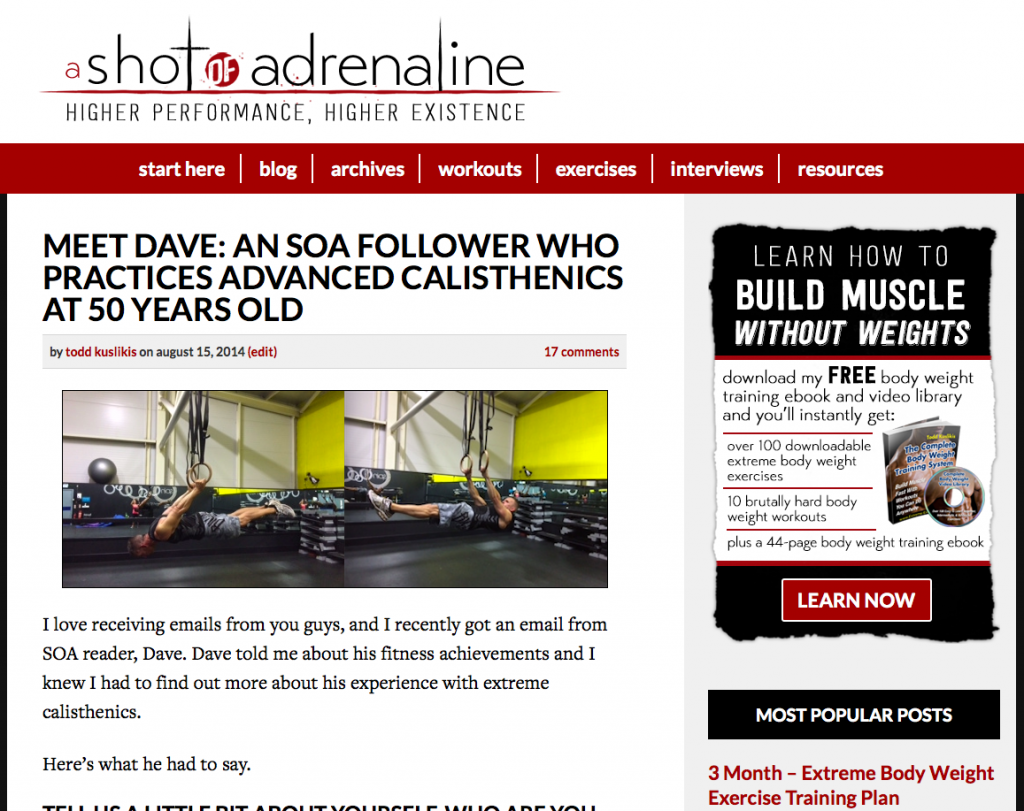 I believe we achieved our goal of readability.

What Next: My Vision for the Future of Calisthenics?

For now, I have no desire or need to change the site around again. I do, however, see a hole in the calisthenics industry.

Many years ago, I taught the internal martial art of Tai Chi Chuan. One memory will stick with me for the rest of my life.

It was early in the morning. I’d already been practicing for an hour and working through my form (aka “kata”). All of a sudden, energy rose up from the ground and into my body. My muscles were relaxed but the energy levels in my body went through the roof. I was fluid, like water, but could have hit with the force of a locomotive. I felt like a tornado.

To this day, I’ve never experienced anything like it again. The power was unbelievable, indescribable.

In Eastern martial arts, emphasis is not placed on muscular development or physical performance, but instead on energy control, focus, balance, deep breathing, and many other elements.

One of my favorite calisthenics experts is Ido Portal. The mantra that he shares with the world is to MOVE! “Movement is life.”

I agree fully, but so much is left out. Movement is not the be all and end all.

My deepest question is: Shouldn’t we be focusing on BOTH?

If you could control your internal energy at a high level, could this also improve your strength? If you breathed deeply from your lower belly (thereby pulling in more oxygen), would this improve your handstand, front lever, and other tricks?

Over the coming years, this is where I’m heading with my personal practice.

As a community we’ll still focus on building strength and muscle and dropping body fat.

Recent research shows that 35% of the entire world (not just the US) is overweight. There is definitely a need for traditional fitness, but fitness is so much more than just jumping jacks. It’s about exploration.

Even after 500 posts, I’m continuing to realize this.

Come and join me on a remarkable journey, and dive deeper into the world of calisthenics.