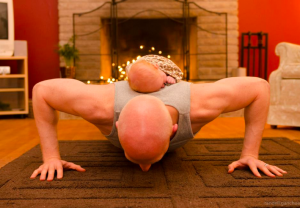 I am a 30 year old dude from Grand Rapids, MI living with the most beautiful woman in the world (my wife) and my baby daughter named Emma. I have been passionate about fitness since High School and have dedicated my life to helping people treat their body as one of their most precious possessions. I believe the body is a temple that houses something of immeasurable worth. We are caretakers of this body and need to treat it as such.

My passion for fitness began to grow deeper at about the age of 16. I played sports but wasn’t very good at them. I was scrawny. I decided to study martial arts and became fascinated by people that could perform feats of strength and agility that didn’t seem human. My original instructor in Tai Chi and Kenpo Karate, Dr. Gregory T Lawton, had incredible agility and was one of my first, very influential role models.

Also, at about this time I began to question why I was here. Even earlier than 16, during Mass (I was raised Catholic), I would sit and think about if there was a God, what Heaven and Hell meant, and if I would go there.

My desire to answer these questions grew to the point where it consumed me (again, remember I am an extremist in most everything I do). I decided to make it my mission to find out what this “God” thing was all about.

My Quest To “Know Thyself”…

Socrates’ “Know Thyself” had a strong influence on me. I frequently pondered what it meant to “know oneself.” My first attempts were through meditation and Zen Buddhism. It is important to note here that I officially left the Catholic Church. I still attended Mass on Sunday but my thoughts were certainly elsewhere.

When I wasn’t in school, you could probably find me locked in my room downstairs with music & candle going, sitting on my zafu in meditation. I tried many techniques: staring at candles, visualizing my breath, emptying my mind, and more. At first, my mind was like a monkey darting all over the place. But after some time, I could get it to settle quickly and I would quietly sit…in peace.

When “The Experiences” Started Happening…


During these times of meditation I would sometimes sit for hours on end. Long stretches would pass where not a single thought crossed my mind. As I was deep in meditation, I would sense things starting to happen…I call them “The Experiences.”

It’s hard to describe, but essentially they were changes in consciousness. Like one time, as I was sitting, “I” began to expand. I could slowly feel myself growing larger and larger until the entire universe was resting inside of my heart. I rested in this state for a little while and then came out of it. When I did, the amount of joy I experienced was unending. I sobbed and sobbed because I realized that everything was inside of me. This is one instance of literally hundreds that occurred over several years. Some came naturally while walking in the woods. Others occurred during meditation. One of them even made me miss my final exam in my Ethics class because I slipped into a state and realized how little importance this class had on all of life. Kind of ironic that it was the “ethics” class that I missed.

I Couldn’t Escape The Anxiety…

Although these experiences brought about a level of joy and peace that can not be described, they never lasted. My anxiety to “escape” the world and enter into complete enlightenment (as the “masters” in my books called it) grew tremendously. So I picked up the pace at which I would study and meditate in order to reach the destination faster.

I essentially became addicted to spiritual experiences and was a junkie.

I had to have my next fix and I sought after them at the cost of friendships, relationships, school and everything else.

Meditation was my main form of practicing spirituality but I also was deeply studying other religions. Over the course of 10 years I practiced Taoism, Buddhism, Shamanism, Baha’i and even Atheism. I was grasping with all my might trying to understand what God was, but could not comprehend Him. “Though they have eyes, they can not see.”

With all of these influences, I began to formulate my own ideas of what religion and God meant. Though these ideas changed depending on my experiences. At some points, I believed in a God that had a Heaven but no Hell. Other times I believed God was a force in the universe. And at times, I even believed that I was God (but just wasn’t enlightened enough to know it). This process went on… and on… and on.

How A Nursing Student In Kalamazoo, Michigan Changed My Life Forever…

During this time, I was studying Nursing at Western Michigan University in Kalamazoo, Michigan. I had a friend in the program named Julia. She was soft spoken and shy. We began to study together in the student lounge. During the course of the evening, conversations turned toward spiritual topics. I asked her what religion she was and she said she was a Christian. I told her my belief that there were many roads up the Mountain and that you just had to follow one in order to reach the top.

She listened quietly as I went on. I described to her what Jesus really meant in his parables and why he was essentially the same spirit as Baha’u’llah, Buddha, Lao Tzu, Muhammad, etc. I thought, “Since she is a friend, I better enlighten her to these spiritual truths.”

After I had finished my rant she unassumingly brought to my attention a couple Bible verses. She said, “What about the verse,

“…there is one mediator between God and man and that is the man Jesus Christ.” (1 Timothy 2:5).

At the moment, I defended my position, telling her that she wasn’t understanding those verses properly. We discussed them for a bit then let it drop on the premise that we “agree to disagree.” Yet, internally, I didn’t let it drop. I began to wrestle with these verses.

“How could Christianity be true and all the other religions too? Especially after hearing these words straight from the mouth of Jesus? Jesus said, that there is only one Way up the mountain. And that is through Him? How could the other ways be true and Jesus’ at the same time?”

Then The “Final Experience” Happened…


I wrestled with the two verses that Julia told me about for several months. It’s not like I thought about them every day, though they were in the back of my mind. One night around 10:30 pm I was laying on the floor of my apartment in Kalamazoo, studying one of my text books.

I was next to my book shelf and I decided to put my nursing book away and read something else for a change. In the bottom left corner of my book shelf was a tattered old King James version of the Bible. I picked it up and started to read. To this day, I do not know where in the Bible I opened to but all of a sudden I started to sob. Tears began to pour from my eyes. I had a complete realization of what I had been doing for over a decade. All of these years, as I was addicted to experiences and formulating my own thoughts about who God was, I was essentially creating and worshipping my own idol. This idol was the focus of my worship each day.

At this moment, God began to show me that I had been turning my back to Him and worshiping this other god called “experiences.” My tears flowed more quickly and I realized that I was a sinner and needed to be saved from myself. In the anguish of the moment there was only one name that I knew to cry out to. And that is the name of Jesus.

In my mind, I desperately cried…

“Jesus, I don’t know who You are or what You are but I do know that I need You. Would You save me?”

Before the words could even echo in my mind I felt a shock throughout my entire body. It felt like every cell was struck by lightening. I had no idea what just happened but realized that I was exhausted so I went to bed (At that moment, I didn’t realize the extent of change that just took place). Morning came and I sat up on my bed.

As I was sitting, I saw myself as a salt doll (visualize an ordinary doll made out of salt) being held up by a large hand. The hand released me and I fell… and fell… until I hit an ocean. As I was sinking into the ocean I began to dissolve (imagine what would happen if you threw the salt doll into the water). As I was melting into the water, I realized that the ocean was Christ…an endless ocean!

Todd, or who I imagined he was, dissolved and eventually no longer existed. At that moment, I realized who Christ was and that He truly was the Way, the Truth, and the Life! I came out of the experience still sitting on my bed. Tears of joy streamed from my eyes as I kept saying over and over again, “I am a Christian. I am a Christian. I know who Jesus is!”

This experience changed my life forever. I am now a child of God. I live for Jesus. This is the most extreme you can get. If you have read this far, thank you. Thank you for letting me share my testimony. You are obviously interested in exercise and fitness and I would like to remind you that…

“For physical training is of some value, but godliness has value for all things, holding promise for both the present life and the life to come.” 1 Timothy 4:8.