Al Kavadlo, The Man Behind The Smile

Many of you who follow A Shot of Adrenaline have heard of Al Kavadlo. But if you haven’t, that’s alright, because the last thing he would want would be for you to feel excluded.

Kavadlo is the smiling, smooth-domed face at the forefront of modern calisthenics and bodyweight training. He may have a shredded body covered in tattoos, but he is the complete antithesis of your stereotypical meathead gym rat, absent the ear buds blaring music that even you can hear and the don’t-talk-to-me-I’m-lifting-bro attitude. 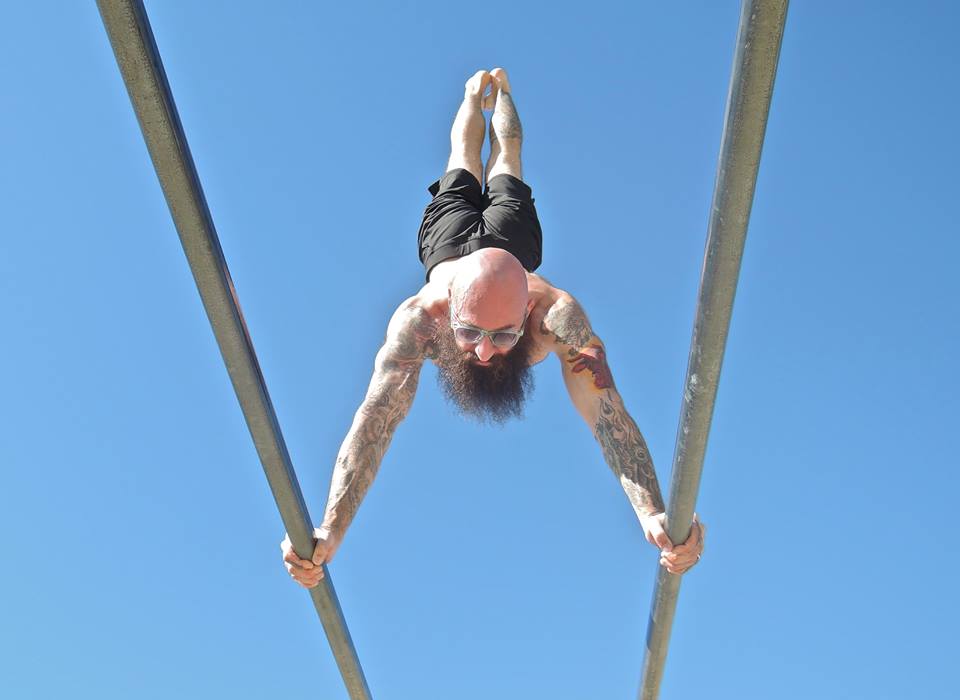 Kavadlo embraces everything fitness ought to be about: personal growth and a peaceful mind that is constantly learning.

He’s also a damn interesting guy, which is why we wanted to show you a few things you may not know about the man currently on top of the calisthenics world (and probably a rock or something) and how he has been pushing limits his entire life.

A native of Brooklyn, Kavadlo grew up wanting to be a rock star. Music was his first love, and although his musical aspirations never quite panned out, he doesn’t lament it too much.

“Even though my musical ambitions didn’t turn out like I’d hoped,” says Kavadlo, “I kind of get to feel like a rock star … getting to travel the world and teach calisthenics. It’s a much healthier lifestyle than being a rock star, so everything kind of worked out for the best.”

Like a lot of young boys, Kavadlo idolized the likes of Hulk Hogan, “Macho Man” Randy Savage, and other iconic characters from the world of professional wrestling.

“There is just something magical about watching larger-than-life musclemen kick the crap out of each other (or at least pretend to in a way that’s convincing enough for a child to accept),” Kavadlo says in his book Pushing the Limits!.

When he learned Hulk Hogan’s name wasn’t the only thing being fabricated, it did not diminish his love of the sport.

“Even once I figured out that pro wrestling was staged, I still admired these men for their strength, power and charisma. Of course, I wanted to be just like them!”

And while professional wrestling is a masterpiece of athleticism and body control (for the most part) it wasn’t meant to be for Kavadlo. But the seed for fitness and bodybuilding was already planted, and by age eleven he was already asking his mother for a weight set.

“When I was around eleven years old, we made a deal that I would be allowed to start

lifting weights when I turned thirteen. I waited for my thirteenth birthday with great anticipation. I probably nagged my mom about the weights every day for the next two years.”

A ZEN-LIKE APPROACH TO FITNESS

Kavadlo really doesn’t care that you want to master the human flag by Flag Day, no matter how clever your Instagram caption would be. Don’t take it personally; he doesn’t think you should care either.

What you should be doing instead of setting deadlines, according to Kavadlo, is being present. “I’m more about the process,” Kavadlo says. “Embracing the journey and committing to doing whatever you’re able to do right now with complete presence and giving it your full attention.

“Try to immerse yourself in enjoying [exercise] for what it is, rather than using it as a means to an end.”

His book Zen Mind, Strong Body discusses how fitness is a process that should include intense focus and a genuine sense of fulfillment and enjoyment.

“When you’re completely focused on your training, the division between mind and body breaks down, and everything seems to fall away. This is what I’m talking about when I talk about ‘Zen Mind.’”

Though it may sound revolutionary, Kavadlo actually wants people to have fun while they exercise, instead of treating it like a chore to be checked off the to-do list. For him, fitness is not simply a means to an end. He encourages people to make it an enjoyable part of their day.

And it makes a lot of sense. Why approach a workout the same way you’d begrudgingly anticipate cleaning the gutters? Improving yourself is supposed to be a fun thing, no fillers needed.

This includes using distractions while working out. There’s a good chance you’ve got your preferred music station or playlist when exercising, but it’s not a necessary tool. Kavadlo suggests shifting your attention elsewhere.

“Hey, if you focus on doing it, maybe you’ll like it,” he says. “Don’t assume it’s gonna be a miserable thing, just because you have this perception of what gym class was when you were eight years old.”

As for his own training, well, he doesn’t really follow a set schedule. He calls it “haphazardous”.

And why not? What’s so scary about avoiding redundant workouts that are more likely to bore you than to advance your training?

More from Raising the Bar:

“Eventually my objectives changed from lifting heavy and getting as huge as possible to feeling good, enjoying life and performing better.”

Wait, he’s suggesting the guys grunting in agony as they attempt to leg press the rough equivalent of an adult moose aren’t having fun?!

Maybe the fact that being spontaneous and having a good time while exercising is thought of “as out of the ordinary” is part of the bigger problem.

It’s tough to shake a preconceived notion you’ve held since childhood. Take pro wrestling, for example. If you were a fan growing up, you probably would have bet your piggy pank Hulk Hogan really did get that big from taking vitamins and saying his prayers.

Kavadlo felt the same way, and that’s how he strived to look as he began taking fitness seriously. It wasn’t until years later he would learn that most people found a bulky, overly muscular body type unappealing.

“Since I was really into the idea of getting huge and muscular like my wrestling idols,” he says, “over the years I dedicated myself to bodybuilding and tried every (legal) supplement I could find in an attempt to make that happen.”

As his career progressed, he feared he was at a disadvantage as a personal trainer simply because he didn’t look like his heroes from wrestling.

“Turns out I wound up doing pretty good as a trainer in spite of not being as huge as the Macho Man. In fact, a few years into my career, I abandoned the idea of building mass altogether, instead choosing to focus on having fun with my training.”

Once again, Kavadlo chose the healthier, happier road. And in doing so he avoided fighting a losing battle trying to get massive, bulging muscles like Hulk Hogan.

So what do you do if you’re a trailblazer like Kavadlo? Make sure that the trail can be followed, of course.

In 2012, Kavadlo and his brother, Danny (an accomplished body weight expert and author himself), partnered with Dragon Door to found Progressive Calisthenics Certification.

Based on Paul Wade’s Convict Conditioning, PCC allows trainers and bodyweight enthusiasts a chance to “both master the progressions personally and be qualified to teach them to others.”

Prior to PCC there was no international industry standard for bodyweight strength training. Al and Danny were certified as the Master Trainers for the program and get to travel the world certifying trainers.

Kavadlo likens bodyweight training and tattoos as such:

“Both are a means of beautifying the body, both involve mental toughness (and can help develop that mindset) and both involve putting yourself through an ordeal in order to achieve a desired outcome. They can also both become a little addictive once you get going!”

Though he’s slowed down a little since his tattoo-heavy early years (he credits this to the fact that large tattoos require too much healing time and interrupts working out), he has no regrets on picking up the ink.

“Some of my tattoos relate to my fitness philosophy, some I got just because I think they look cool,” he says.

“Others showcase my sense of humor — the ink on my left hand index and pinky fingers is a good example of this. The tattoo depicts a pair of devil’s horns. I’m amazed how often people think it’s supposed to be my finger bones. Hasn’t anyone ever been to a heavy metal concert?”

Another favorite of his is the phrase “Nothing lasts forever” which is emblazoned across his neck. He relates its meaning to fitness as “If you don’t use it, you lose it.” It’s not meant to be cynical, but rather an empowering mantra to cherish what you have, as well as the pursuit of opportunities that lay before you.

In other words, he got everything right about “Carpe Diem” that YOLO didn’t.

But even more prevalent on his body than the ink is Kavadlo’s near-constant smile. It should be pretty clear at this point that Kavadlo places personal happiness and enjoyment far above how many dead lifts he did today. So it should come as no surprise that this guy is, like, always smiling.

Sure, he hams it up for the camera every now and then. But as the man himself said in response to a fan question on the subject, “I’m just a happy guy who loves what he does.”

We love what Kavadlo does for the bodyweight culture. He champions the cause of exercising for the pursuit of your best, most fulfilled self, and genuinely enjoying the journey.

“The truth is,” Kavadlo says, “that while getting fit is simple, it’s not easy — and it’s never going to be.”

Paul Wade, Creator of Convict Conditioning, called Kavadlo’s Raising the Bar “very likely the most important calisthenics book on strength and conditioning to be published in the last fifty years. If you only ever get your hands on one training manual in your life, make it this one. Buy it, read it, use it. This calisthenics book has the power to transform you into the ultimate bar athlete.” You can grab a copy here.