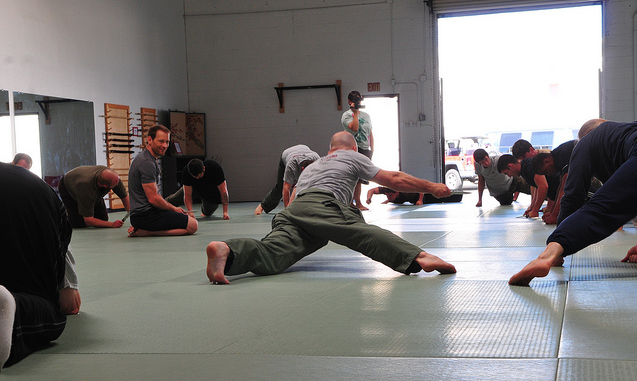 I frequently find myself saying, “I have only scratched the surface of bodyweight training.”

Awhile back I interviewed Lee Labrada aka Mr. Universe. I asked him how he incorporates bodyweight training into his workout plan. He said that he loves bodyweight exercises as finishers. He starts off with a demanding heavy lift and then immediately jumps into a bodyweight exercise that works the same muscle group.

Most of the fitness world sees bodyweight exercises this way.

Each person can choose to see training however they want.

I’ve been in the bodyweight training industry for many years and it seems the more I focus on it… the more I realize I don’t know.

How Far Does This Rabbit Hole Go?

In my first product that I ever created, Bodyweight Overload, I introduced you to a topic called Angular Training.

Essentially, its adjusting the angle of the exercise to make it more challenging.

For example, instead of doing a standard push up, put your feet on a chair. You immediately made the exercise more challenging and put the emphasis on your upper chest muscles.

Last week, I got into a creative mood and started playing around with different angles.

Sometimes when I am training I shut my mind off and just go as hard as I can. I focus on the numbers 1… 2… 3… in order to ease (or maybe distract from) the pain.

Other times, I think about my training.

I question myself and ask…

“How can I make this harder?”

“How can I make this more unique?”

“How can I change this so its geared toward calisthenics muscle building?”

*In my practice, my mind started thinking about “angles” and how there are WAY MORE ways of adjusting the angles in bodyweight training than I first thought.

Why Are Angles Important?

Adjusting the angles in bodyweight training help you add more difficulty to an exercise.

It is a tool in your calisthenics toolbox that can be applied to any exercise: pull ups, push ups, squats, etc.

It forces the muscles to work harder because they are not used to that particular angle. This leads to larger, stronger muscles. 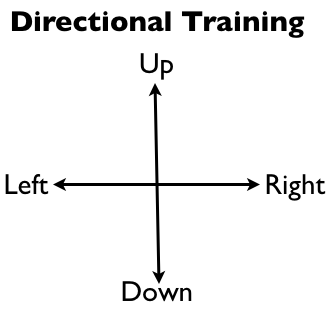 Normally, when you do the push up, you do it in 2 directions: Up to Down and then Down to Up.

That’s how people have been doing it for thousands of years.

Why have we done it that way?

Honestly, I don’t know and it doesn’t much matter.

There are so many different directions (or planes) that we can follow when doing the push up. We can go Left to Right, Right to Left, Up to Right, Up to Left, Up to Forward, Up to Backward, etc.

Before I go too deeply into this… let’s look at a picture of the push up. You’ll see here that I am doing a normal push up.

The Standard “Up/Down Push Up” 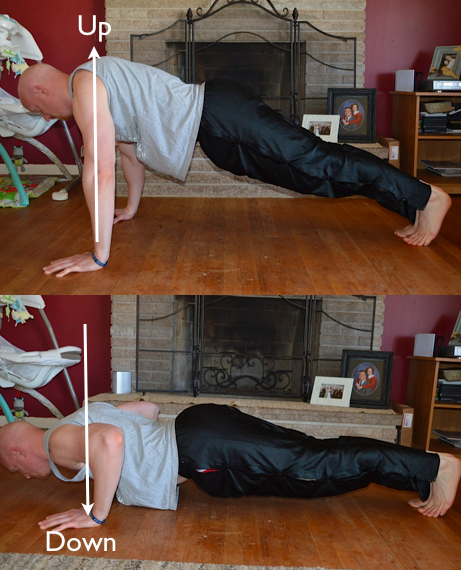 The plane or direction that I am following is Up and Down. This will work the middle part of the chest, front part of the shoulders and triceps. 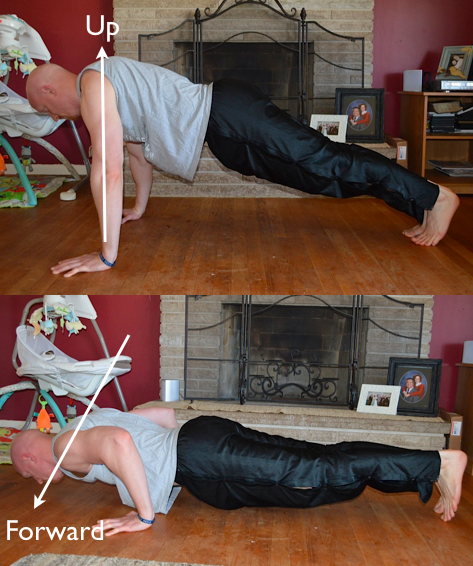 In this push up, we change the angle or plane that we are moving.

We start off in a normal push up position.

Yet, when we go down we don’t go straight down we angle forward. This makes the exercise much more challenging and puts emphasis on your upper chest and shoulders. Try to knock out a bunch of these and you’ll feel the power of the angle. 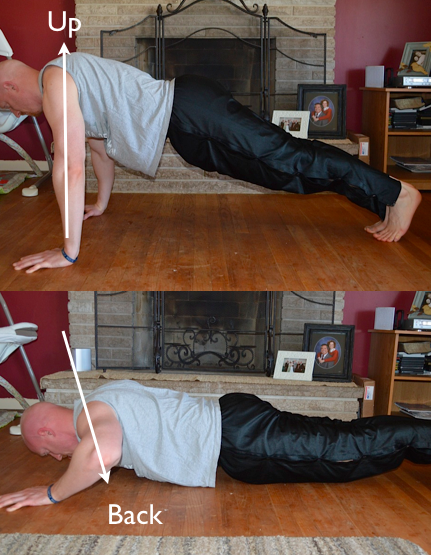 Now, instead of going forward try going back. You’ll need to walk your feet back as go down. This angle of the push up puts more focus on the back muscles. 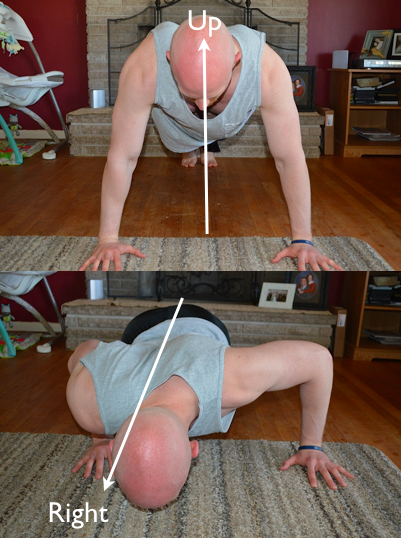 When we drop to the right side we again changing the angle. We also change how our bodyweight is distributed. More of our weight goes into our right arm which makes it more difficult.

The Up/Left Push Up 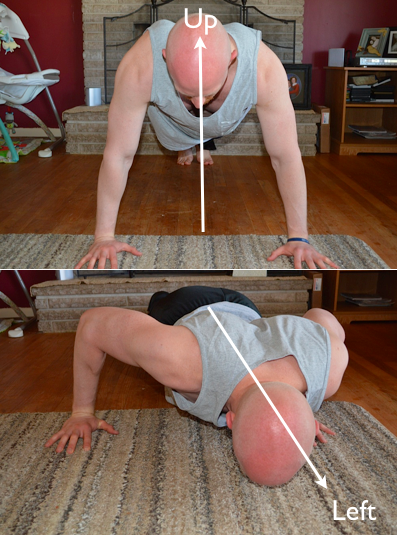 Same thing for the left side.

If you are really creative you can even try combining angles such as going to the left and forward. Or going back to the right.

If frequently do “Around the world” push ups. I start in the up position then go forward and down. Then I walk my feet backward while I am in the down position which pulls my body back and then I circle back up.

Make sure to reverse it too.

That’s Well and Dandy for the Push Up Todd. What About Other Exercises?

The Bodyweight Compass Technique can be applied to lots of other exercises too.

Below, I’ll show you how to apply it to the Pull Up.

The Up/Down Pull Up 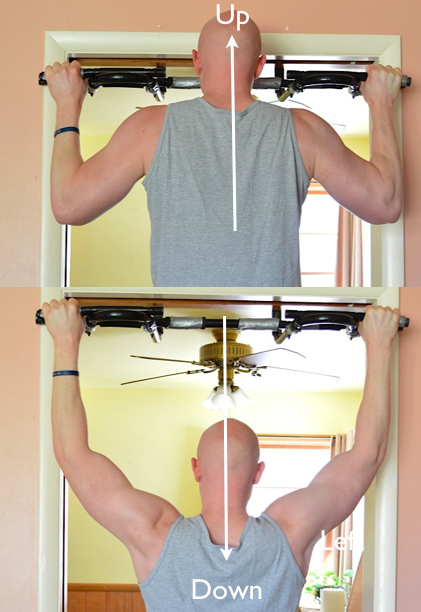 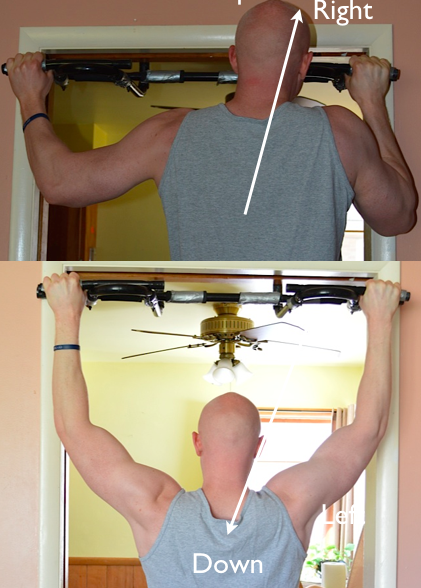 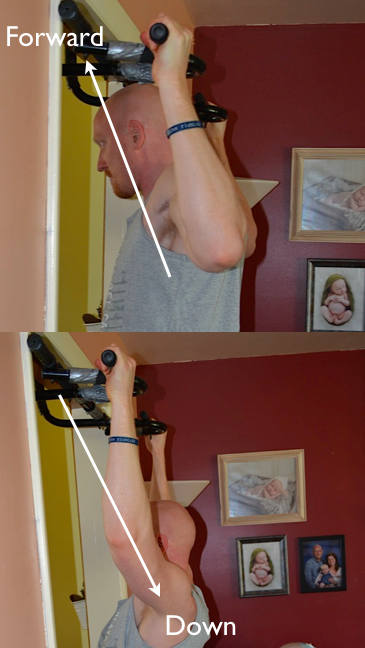 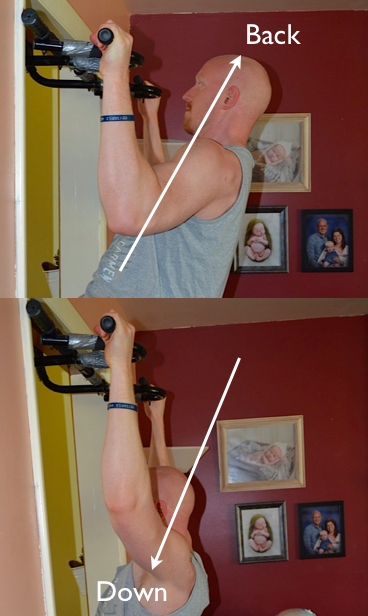 When you are advancing in bodyweight strength and size you can’t just focus on how many reps you are doing.

There are so many components that make up calisthenic bodybuilding. The Bodyweight Compass Technique is one method.

Next time you drop for some push ups don’t do the normal “Up/Down Push Ups”.

Change up the angles and see the exercise as a compass.

You may even want to mix and match a bunch of angles to make up a crazy Up/Right/Left/Forward/Back Push Up!

To your bodyweight success!