UFC 195 was headlined by a fight for the Welterweight championship on January 2. The reigning champion, “Ruthless” Robbie Lawler, took on challenger Carlos “The Natural Born Killer” Condit, and over an outstanding five full rounds, the split decision went to Lawler.

Many people from the UFC media had Condit winning the fight. UFC President Dana White felt the same way. And in the post-fight interview with Joe Rogan, who called it “one of the best fights [he’s] ever seen.” Lawler gave Condit his due, saying there were “two winners”, which probably means he was aware how easily the split could have cost him the title.

Despite all that, Condit said afterward that we may have witnessed his last fight. It’s something he’s alluded to in the past. Before he does that, we wanted to take a closer look at one of the most intriguing guys in the sport.

Raised by Action Movies in a Town That Breeds Fighters

As is the case with many mixed martial artists, the gateway sport for Carlos Condit was wrestling, which he began when he was nine. Gleaning inspiration from Jean Claude Van Damme movies and the Ninja Turtles, something clicked the very first time he watched UFC. He recalls thinking, “Wait a minute! This is real? This is like Blood Sport, but this is the real deal.”

At the time, MMA had nothing to do with UFC. But for a kid that grew up idolizing Van Damme’s Bloodsport, Lionheart, and a movie franchise responsible for one-half of Vanilla Ice’s hits, it was enough to light the spark of a lifelong love affair with fighting.

This eventually became a mechanism for Condit to deal with some of the rougher bumps in his early life.

“After my parents split up, life took some strange and difficult turns. Divorce is never easy on kids and I had a lot of anger built up inside of me. Some of that dulls as time passes and you get further away from the initial impact, but fighting was a way to channel some of that emotion and aggression.”

Crafting a makeshift bed out of two wooden pallets so that he could sleep in the gym he trained in in the early years, Condit began separating himself from the career path seemingly already laid out for him.

His grandfather, father and uncle all made their living as electricians from the same union hall, and no doubt Condit was expected to fall into that lineage. But his father, Brian Condit, knew his son had a fighting spirit.

“I’ve never seen a more resilient human being than my son Carlos,” Brian said. “When he was in youth wrestling, he’d come out and get down on points every time and just when you thought it was over, he’d pull out something special and get the pin.

“He also hates to lose, so the matches he’d come up short and couldn’t turn it around, he’d go under the bleachers or locker room and just be inconsolable until something snapped and he’d processed it.”

Even Condit himself admits the years of sleeping on friends’ couches and working odd jobs to make ends meat took its toll, but he’s persevered.

“I’m not gonna lie, there’s been some ups and downs as far as my motivation,” he says. “But I’ve come into a real good place mentally in the last five years. I’m doing this because I love it.”

If fighting weren’t in his bloodline, it’s certainly in his hometown roots. In addition to being known as the city that could have easily ended its name a few letters earlier, Albuquerque is also home to a host of some of the best fighters of the last fifty years.

These include Johnny Tapia, Bob Foster and the person responsible for one of the biggest upsets in UFC history. 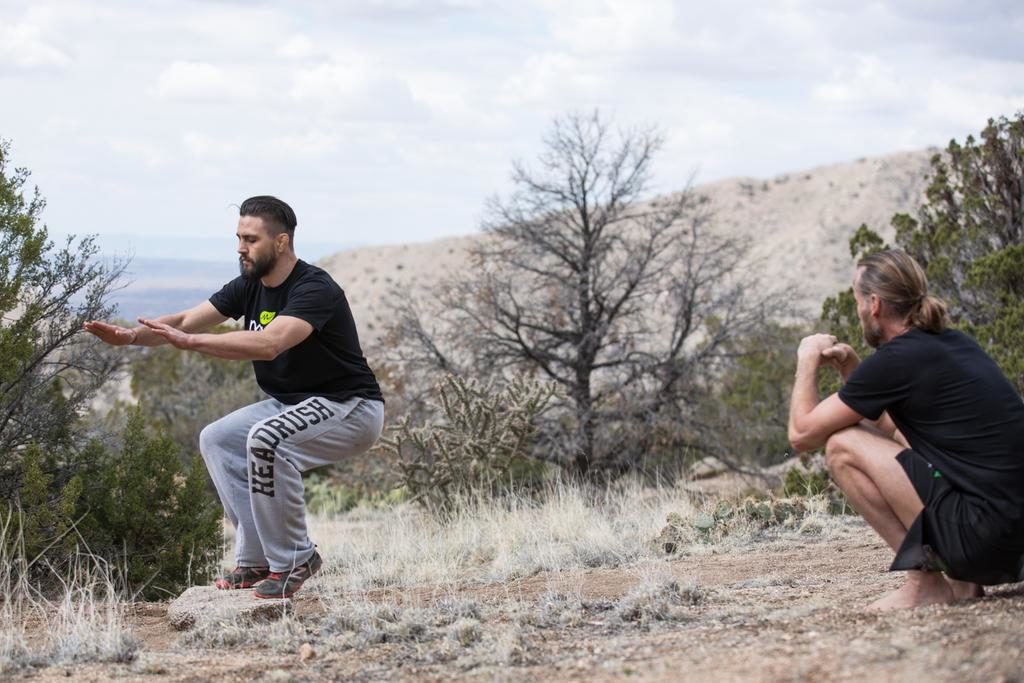 But Condit has bought in, saying, “We’re trying to relearn something we may have lost. As adults, having sat in chairs or having laid in a bench to do very linear stuff like bench press or squat or whatever, we kind of lost that natural movement ability, and to gain it, it takes a lot of focus.”

In 2014, Condit suffered a torn ACL and meniscus. He was sidelined for a year, but he directly attributes MovNat to the accelerated recovery time.

“For a fighter to be in correct position to execute a strike effectively, they need to have mastery of their movement, of their position, of their balance,” says Condit. “I think that’s what really separates the elite fighters from somebody who’s, you know, ‘good enough’.”

As for that fight with Alves? Well, not long after the opening bell rang Condit decided the canvas didn’t have nearly enough blood on it. The fight was stopped after the second round, with Alves being the unfortunate donor for Condit’s redecorating.

Condit said the victory was due in part to his MovNat training.

When he isn’t focused on movement, Condit is busy with training sessions that will make you sore just watching them.

His workout begins innocuously enough with some routine stretches, but those soon transition to a wide range of exhaustive exercises, including sled sprints, sparring, battle ropes, and a pool workout that’s anything but relaxing. He explains his reasoning for such a diverse workout:

“He’s also got to be explosive, too, which is another energy system we have to develop, so it’s very important that we identify those things.”

But Gonzales makes it clear not every workout can be a back-breaker.

“The idea is, get him strong, get blood back in those joints and get him healthy for the next workout.”

It’s not the most linguistically friendly term, we’ll grant you that, but it’s actually a lot easier to understand than spell.

Kinesthetically adaptive unconscious derives from a term created by Malcolm Black in his book Blink regarding the way the brain processes incoming information without our conscious awareness, producing judgments and behaviors within seconds.

So basically, when you shriek like a five-year-old and throw yourself under a picnic table the moment you see a wasp flying near you, that’s your adaptive unconscious making decisions without your consent. (Adaptive unconscious doesn’t take your resulting humiliation into consideration.)

But in the octagon, producing judgments and behaviors within seconds isn’t fast enough. So The Natural Born Killer employs kinesthetically adaptive unconscious, which instantly analyzes his combat movement.

It’s one thing to utilize KAU; it’s quite another to be as effective as Condit. His reaction time is so fast that some believe he can cut a loophole in his brain’s reflexive feedback to maximize speed.

The scientific evidence behind this is scarce, and we’ll be the first to raise an incredulous eyebrow, but watch this guy break down Condit’s reaction time and decision making. We think you’ll at least agree his reflexive skills are superb, even if you don’t believe he is the latest guy Morpheus has unplugged.

An Imperfect Past, An Uncertain Future

In a career spanning back to 2002, Carlos Condit is 30-9 with only two of his victories not by way of KO/TKO or submission. He captured the interim Welterweight championship in 2012 with a win over Nick Diaz. Diaz was very unhappy with the results, among others, who called Condit “The Natural Born Runner”.

Ten months later, Condit squared off with one of the most beloved fighters in the history of the sport, George St. Pierre. Wearing what many deemed an undeserved title, Condit entered the arena to a chorus of boos . Despite Condit landing one of the best head kicks you’ll ever see, St. Pierre won by unanimous decision.

Then, on January 2, after four non-title fights (two wins, one decision loss and one TKO due to the aforementioned knee injury), Condit entered the MGM Grand in Las Vegas as the challenger for the Welterweight championship.

Champion Robbie Lawler had just come from the hands-down best fight of 2015. What ensued will probably land on the “Best Fights of 2016” list. As we mentioned, the judges gave Lawler the split decision, which came with mixed reviews.

So, as is natural with such a breathtaking and brutal fight, the big question is whether or not there will be a rematch. We mentioned Condit flirting with the idea of hanging it up, but he recently said a rematch with Lawler is something he “could get excited about.”

Dana White is playing coy but would have to ignore the dollar signs in his eyes to not want the same thing.

It’s tough to guess which way Condit will ultimately lean. He’s 32 with 39 professional fights under his belt, and all that time mastering the human body with MovNat probably helps a guy gather his thoughts.

“Fighting is a tough sport where happy endings are few and far between,” he says. “I definitely want to leave the game before the game leaves me.”

Here’s hoping for a few more instant classics like the Lawler fight before either of those departures occurs.