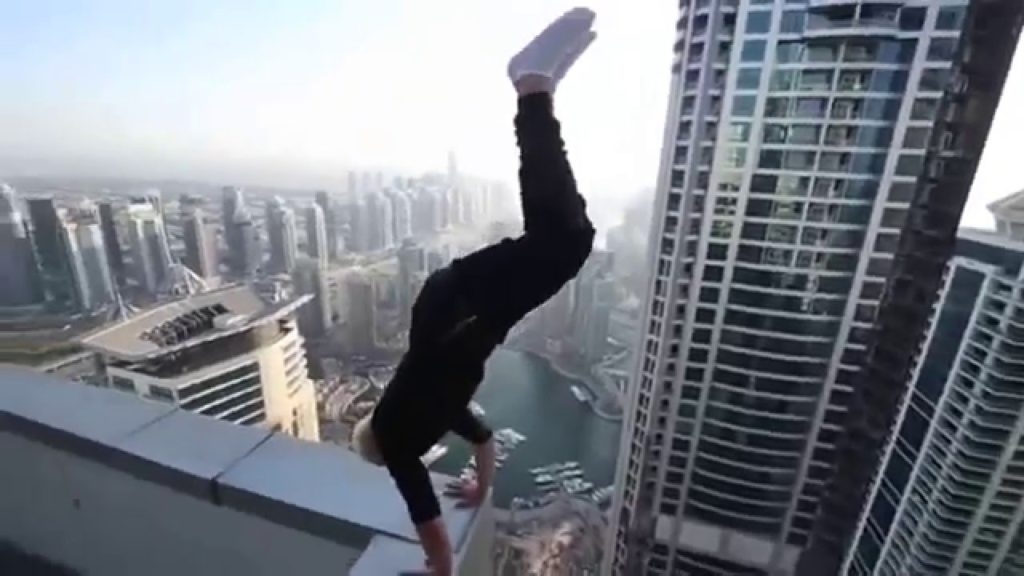 Last week, we showcased the unique exercise that is the handstand. Hopefully those that had a chance to read it saw the numerous benefits of the classic childhood activity, and will now be motivated to start incorporating handstands in their workouts.

So have you tried a handstand lately? If not, give it a shot before continuing this article; it’ll provide some perspective. We’ll wait.

Welcome back! How did the handstand go? Tough, right? If you were able to fully execute one, were you pretty unstable? Yeah, it can be tough to stay balanced in a handstand. Just keep that in mind.

Today, we thought we’d take a walk on the wild side and show you people who took that idea of incorporating handstands into their workouts and ran with it like Forrest Gump. These are some of the most extreme handstands ever captured on film, performed by daredevils who laugh at danger with their feet to the sky.

Now, since we here at Shot of Adrenaline are really big on prolonging life, we thought we’d take a moment just to state (what should be) the obvious: DO NOT TRY THESE STUNTS, AT ANY TIME, EVER. They were performed by experts with years of training, and we’re sure for their moms even that wasn’t good enough.

What you’re about to see is not only amazing body control, but mental toughness. It’s truly a level of calisthenics very few reach. The following athletes took an exercise that’s certainly difficult enough at 0’ altitude and added some insane twists. See if your stomach doesn’t turn in knots just watching.

Did we mention not to try this at home? We really can’t stress that enough.

Great news! This is the only one where the guy falls, and it’s planned.

Diver Carlos Gimeno wanted to make one dive extra-memorable for his fans, so as he stood upon the 25-meter ledge, he used the ladder to position himself in a handstand.

Now, when you watch the video, you may think it’s less impressive than other handstands because he’s got his feet hooked onto the ladder rungs for support. And that’s true, at first. But then, one foot at a time, Gimeno detaches from the ladder with slow, precise movements. If you think it’s just another day at the office for the veteran diver, take a look at his feet: He’s visibly shaking.

He maintains composure the entire time, though, and releases from the platform and lands a perfect dive into the water. He lands feet first, which if it was not planned, we’re sure he wasn’t too upset about.

With a name like Eskil Ronningsbakken, you would think trying to write your name on one line would be enough of a thrill. Unfortunately for Ronningsbakken’s loved ones, his thirst for adventure is a bit more exotic.

Ronningsbakken has made a catalog’s worth of death-defying stunts:  He balances over raging waterfalls, on steel rings, rides a bike across a tightrope — all at very high altitudes.

One of the most jaw-dropping stunts he’s ever performed was in 2009, when he did a handstand on the Kjaerag Bolten rock in Norway, one thousand feet high. But for reasons known only to Ronningsbakken, that wasn’t enough of a challenge. So he did his handstand while balancing on a chair. And apparently the chair was looking for an adrenaline rush too, because it had one leg balanced on a pole. 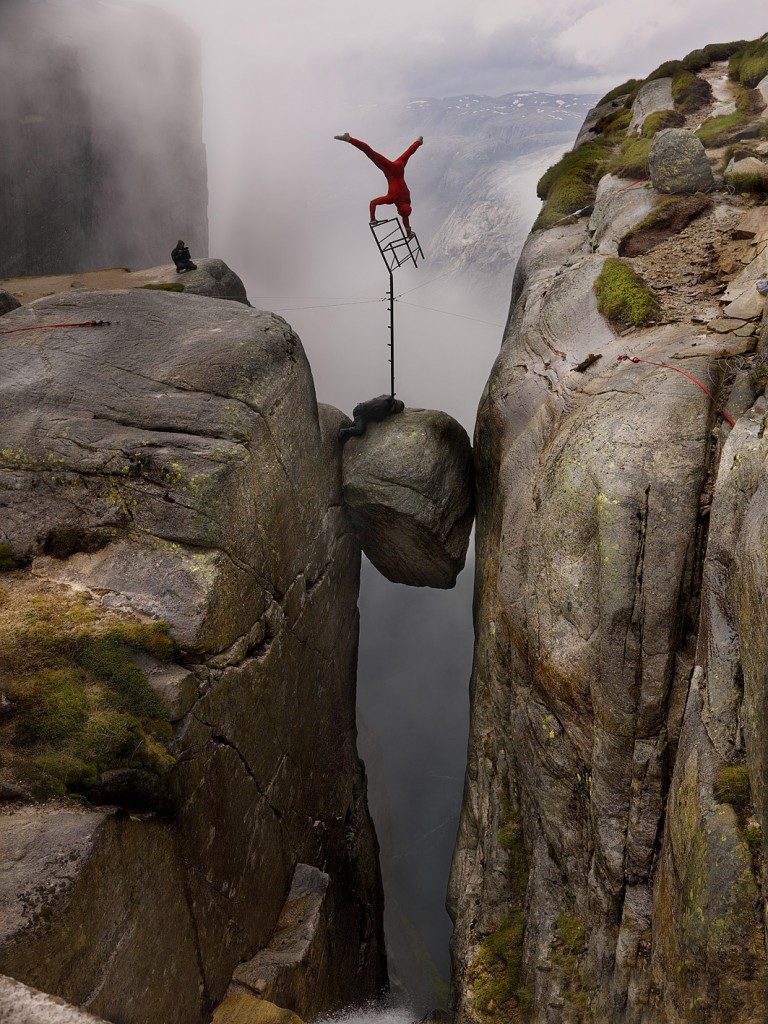 We haven’t the slightest clue how he got down from there. Any opinions are welcome.

Scott Young is another chronic thrill seeker who flirts with death so much it’s amazing death doesn’t just lean in and kiss him already.

He’s a member of the 3Run Freerunning Team and has done extreme handstands in England, China and India. He did one handstand on the edge of a 20-story building in New Delhi, then apparently felt it was only half as fun as he’d hoped. So he did another handstand off of a 40-story building:

With a camera attached to one of his shoes, he perches over the building’s ledge like Batman watching over Gotham. With one last look at the ground he’s hoping to not see approach him very quickly, he gets into handstand position and locks in.

The shoe-cam is able to capture the view Young is seeing, and it’s enough to make you shudder from the comfort of your own home. “At least he’s staying perfectly still,” you say to yourself. But then you see that the shoe-cam begins tipping over the edge.

He actually bent his foot so the camera could get a better look at his view. We love a guy who gives his fans his all, but next time, Mr. Young, we’ll happily take your word for it.

The thing that sets this next stunt apart from so many others we found is that it was done with apparently no intention of being noticed by anyone. We’ve shown you athletes who performed amazingly dangerous handstands in exotic locations, but how about someone who does it with no camera, no journalist, and not even someone to take their name down?

In Sydney, Australia, a man named Matt Ahern was walking with his family along Sydney’s northern beaches when his children pointed out something rather odd: a man at the very top of a 40-meter tree. There were no cameras or fanfare at the tree’s base — it appeared the man simply saw the 130’ tree and decided it was a fine day for some climbing. 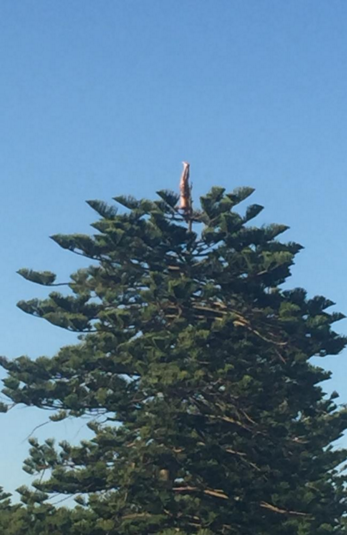 “He started doing a handstand … He was there for a good minute or a minute-and-a-half,” Ahern said. “He really didn’t have a care in the world.”

Apparently that included any interest in taking credit for the stunt, because the man never came forward after the story reached news outlets.

1) Just Another Day on a Skyscraper

Oleg Sherstyachenko, better know to his fans as Oleg Cricket, takes the cake for the most gut-wrenching handstand video we’ve seen.

To be fair, it’s never been officially declared to be Cricket’s stunt, but most people believe it to be him. The point is this was unreal.

Cricket is known for his daredevil stunts in Dubai, and he really raised the bar with this skyscraper handstand, two words with no business being next to each other. The video begins with a look down the side of the skyscraper — the ground is barely visible, they’re so high up.

Cricket gets into his handstand and immediately decides it isn’t exciting enough and begins bending his legs. And if you look closely, you can see his right palm is actually slightly over the edge.

Now, the surface of the ledge upon which Cricket was performing the handstand looks pretty smooth, which then begs the question WHY OH WHY ARE YOU JUST WEARING SOCKS? And these don’t seem like special daredevil socks either; these look like the ankle socks you get at Target in a 12-pack. Is that really all the support you want to give yourself when dismounting?

Apparently physics had the same questions, because when he does dismount, he just barely doesn’t slip. He regains his balance almost immediately and walks confidently along the ledge. The video concludes with the cameraman, having just seeing his subject narrowly avoid a tragic fall, pointing the camera at Cricket and saying, “Umm…”

It was all he could muster and yet perfectly encompassed how nonchalantly the stuntman reacted to near-disaster.