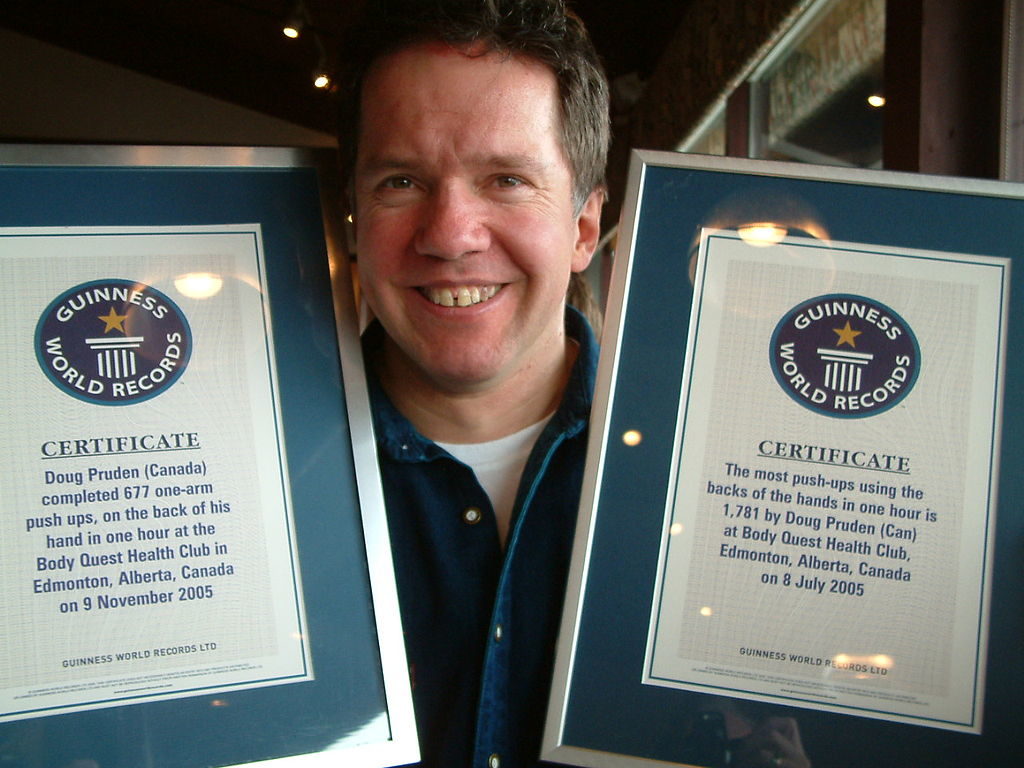 Edmonton, Alberta is known for many things: It’s home to the largest mall in North America. It’s produced 67 Rhodes Scholars. And, if you ever tried selling rat traps in Edmonton, you would likely be laughed out of town.

But there’s one jovial, energetic guy who’s staked his own little claim to fame in the capital province of Alberta. Doug Pruden is Edmonton’s “Push-Up Man”. And boy oh boy does this man push-up.

Pruden started his performing career in a completely push-up-free capacity (he hated physical education as a kid), by standing outside South Edmonton malls and trying to pass on the word of God. He wasn’t a smash hit, apparently, unless getting spat on is your idea of success. But as he began to get more involved with personal fitness in his late teens, he discovered a knack for the classic bodyweight exercise and started challenging nationally and internationally held push-up records.

In his earlier years, he traveled to schools and workplaces to talk about fitness and display his aptness for his favorite exercise. These days, he earns cash by walking up and down Edmonton bar strips and seeing who would pay $5 to see 30 one-arm push-ups.

There’s a lot out there about Pruden and his records. He’s also drawn some criticism as a media-crazed attention seeker. (To be fair, if you can do 114 one-arm push-ups in a minute, that’s probably worth telling people about.) No matter which way you lean, Pruden is a marvel of bodyweight training, and certainly worth some examination.

Pruden got his first taste of world recognition in 2001 when he completed 102 one-armed push-ups in one minute (two years later he would raise the bar with the aforementioned 114 one-arm push-up record). Most people can’t do a one-arm push-up period, let alone at the rate of almost two every second for a minute.

He really took a shine to breaking records after that and hasn’t been bashful about setting some other ones. He’s held ten records in his life and still holds seven to this day. He’s appeared in the Guinness Book of Records four times. Here are the records he’s held over his lifetime:

He’s also appeared in The Book of Alternative Records eight times, alongside greats like the guy who collected the most airsickness bags and the world’s fastest whip cracker. Yes, the book is appropriately titled.

The last time anyone asked, Pruden had completed over 10.5 million push-ups in his lifetime. For comparison, that’s almost double how many times you’re going to blink this year.

You’re not going to crank out a thousand push-ups in twenty minutes–which Pruden routinely does–on a whim. There has to be something that drives you to keep going until your arms and whoever you made count your reps are totally exhausted.

Pruden’s motivation is not too dissimilar from other bodyweight experts. He uses push-ups to better himself as a person overall, not just physically. As he told a group of schoolkids, “I do pushups because it has taught me one main thing that’s needed in this society: patience and endurance, as well as excellence in everything you do.”

This mindset is part of the foundation of calisthenics, which teaches you to exercise for personal fulfillment. And Pruden says it’s easy to stay motivated when you don’t have to drive to a crowded gym everyday.

“It’s a  great free exercise,” he says, “meaning no weights and commuting to a gym in smoggy traffic full of irritated drivers. I’d rather be at home and work out and feel great afterwards about the day.”

Pruden got serious about training because he “wanted to push up the push-up limit.” Since he can do them faster than kids watching can count, we think it’s safe to say that job’s done.

His Relationship With The Media

Pruden’s reputation on the web in relation to the media is, shall we say, a little muddy. In his heyday, television and newspapers didn’t seem to want Pruden nearly as much as Pruden wanted them.

Like when the band U2 came to town. Pruden called the local news and waited outside all night to meet the band. He met Bono and even got quoted in the local paper. Sounds cool, right? Too bad Pruden wasn’t a U2 fan and didn’t know any of their songs.

He’s been known to sit in studio audiences of talk shows with a sign that reads “1000 Push-Ups”, prompting the host to engage him and ask him about his talents, which sometimes results in a demonstration.

A few years ago in Edmonton, a club promoter apparently thought it would be a good idea to have Pruden knock out a thousand push-ups while DMX played in the background. The performance didn’t exactly captivate the audience, whose reaction was about what you’d expect from people in a nightclub who just got told a stranger was going to start doing push-ups on the stage.

Now, to be fair, he did get on David Letterman once. But then he was just delivering a pizza.

Alright, that’s enough investigative journalism from us. The point is, regardless of how you feel about Pruden’s attention-seeking antics, he’s made a name for himself in bodyweight fitness. His records for multiple variations of push-ups are worthy of acclaim. He uses the idea of making himself better, both mentally and physically, as motivation for his continued training.

And, according to this guy who hung out with Pruden for an evening, he’s a perfectly nice guy.

So next time you’re face-down after not completing a challenging calisthenics exercise, and you don’t think your body is capable of going any further, think of Doug.

And when you do execute that exercise perfectly, and you have the sudden urge to make a sign describing your success to hold up in a studio audience … think of Doug.