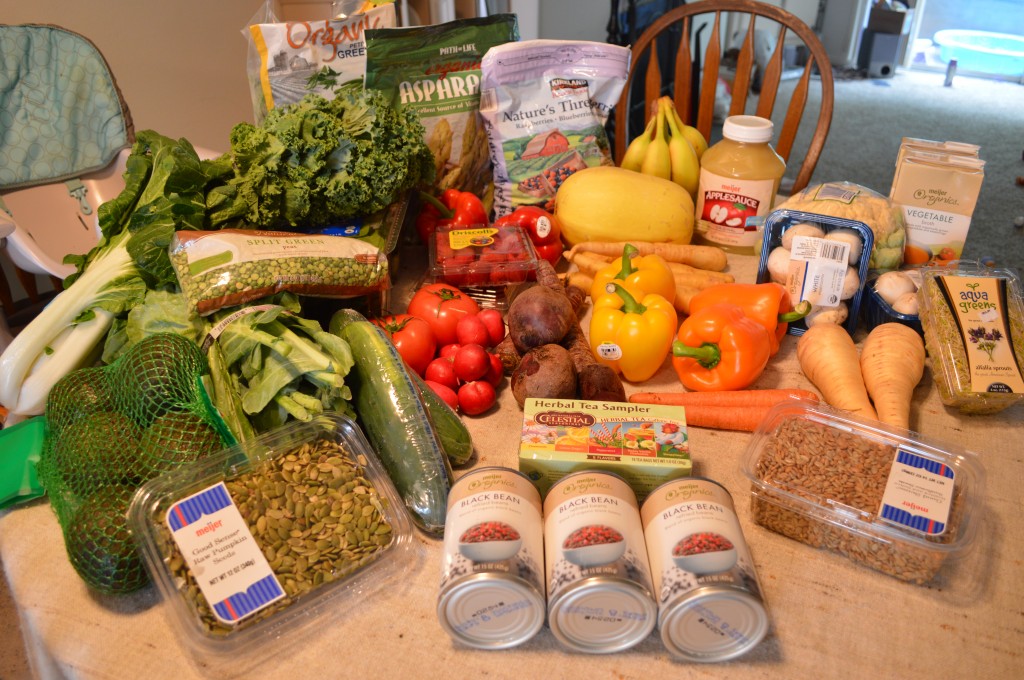 Todd and I were recently challenged to reassess our food choices. Let’s face it, we can all get into food ruts. Even healthy food ruts.

I’m entering my eighteenth week of pregnancy, and in the last few weeks I’ve finally managed to get back into the kitchen. For about nine weeks, the sight, smell and taste of food sent me running to the bathroom at all hours of the day. I basically lived on bananas, gluten-free crackers and Izze.

It got so bad that I couldn’t even hold water done for two days straight. Desperate, I tried an over-the-counter home remedy that ended up saving the day. Eight pounds lighter… I went back to my banana, cracker and Izze diet.

Grocery shopping was equally painful. My goal was to get in and get out. I held it together, but once even vomited in the parking lot. Food was not my friend. I would just throw items in the grocery cart, take it home, and let Todd and Emma fend for themselves. Thankfully, Todd knows his way around the kitchen well enough, so he and Emma never starved!

Maybe you’re not pregnant, but you’re pressed for time, have gotten overly comfortable with your food choices, or you just lack a sense of adventure when you food shop.

You make your way through the grocery store on the same well-worn weekly path. You know which aisles you need and how far down you need to go. You know the exact shelf that holds your item, and if it’s not there, it throws you off.

How can you tell if you’re in a grocery shopping rut?


We’d definitely gotten into a rut.

When Todd and I were first married, we had two goals. One was to try a new food every month, and the other was to never cook the same thing twice. It was fun. I had a 9-5 job that wasn’t stressful, and I loved coming home to cook. This didn’t mean that we never ate quiche more than once, it just meant that I didn’t make it the same way twice.

Don’t get me wrong, we still eat vegetables like nobody else. It’s the first thing people comment on when they open our fridge. But we became stuck in a rut eating the same vegetables. Mostly because of my pregnancy, we’d lost the mindset of wanting to broaden our taste palate.

Todd and I recently watched a YouTube video from our beloved doctor. I wish everyone was blessed with this type of resource in their life. We learned several amazing things, but the lesson I wanted to share with you today is about Eating the Rainbow. Our goal should be trying to eat a variety of whole foods with vibrant colors. Our bodies need all the colors to run optimally.

Why is new food hard to try?

People give a ton of reasons for not trying new foods.

So what are the solutions?

If your family wants to try a pomegranate for the first time, just buy one and share it. If it’s a hit, you can buy more next time. If it’s a fail, then it was only a small purchase that you don’t have to feel guilty about.

2. Make your children a part of the process.

If they’re older, let them pick out the new food for the week, or let them help wash or cut the food. Research repeatedly shows that when children are involved in the process, they are more likely to try different foods. Let them fill out their own Eat a Rainbow Chart, like this one from Such a Mama.

Emma eats pretty much anything, but we’ve noticed that there are times when she doesn’t want to try a new food, and that’s OK. We still put that food item on her tray so that she has the opportunity to try it. We don’t ever assume she won’t like something.

Our hope is that eventually she’ll grow used to the feel and taste of eggplant and learn to love it, but we never want to force food on her. Our goal is to introduce a wide variety of healthy foods for her try and enjoy.

Also, praise your child for trying out a new food, even if it’s only a small bite. Just don’t reward them with a sugary treat! 😉

3. You don’t have to be a food expert to try new foods.

When I was in my food-rut mentality, I’d forgotten that the grocery store actually helps you out.

Our grocery store has little signs above the produce that tells you what the food is like (mild, bitter, etc). Hopefully, your store will have similar signs. I might not know much about a new food, but this gives me a few ideas and pushes me in the right direction.

If your store doesn’t have signs like this, you can always get help online. I always say that the internet is the best cookbook. I never buy cookbooks now because whenever I want a recipe for something, 99% of the time I can find it on the web for free. I can also compare ten other similar recipes so that I can tailor the best recipe to my family’s needs.

Instead of making a list of foods that I wanted our family to eat this week, I made a list of foods based on their color. After that, I just lingered in the produce aisle looking at all the different possibilities. I found foods in my cart that we haven’t touched all summer!

It was so fun. Here’s the produce I bought:

I definitely went a little overboard. There’s no way we’ll eat all those vegetables in just one week. Thankfully, some of the are frozen vegetables, so they’ll last a few weeks.

Here’s one of the dishes I made.

I will say that the preparation took a bit of time as I had to cut up all of the veggies; about 10 minutes. Cooking time was another 10-15 minutes. In all, we had an amazing, colorful meal in under 30 minutes. Not too shabby! 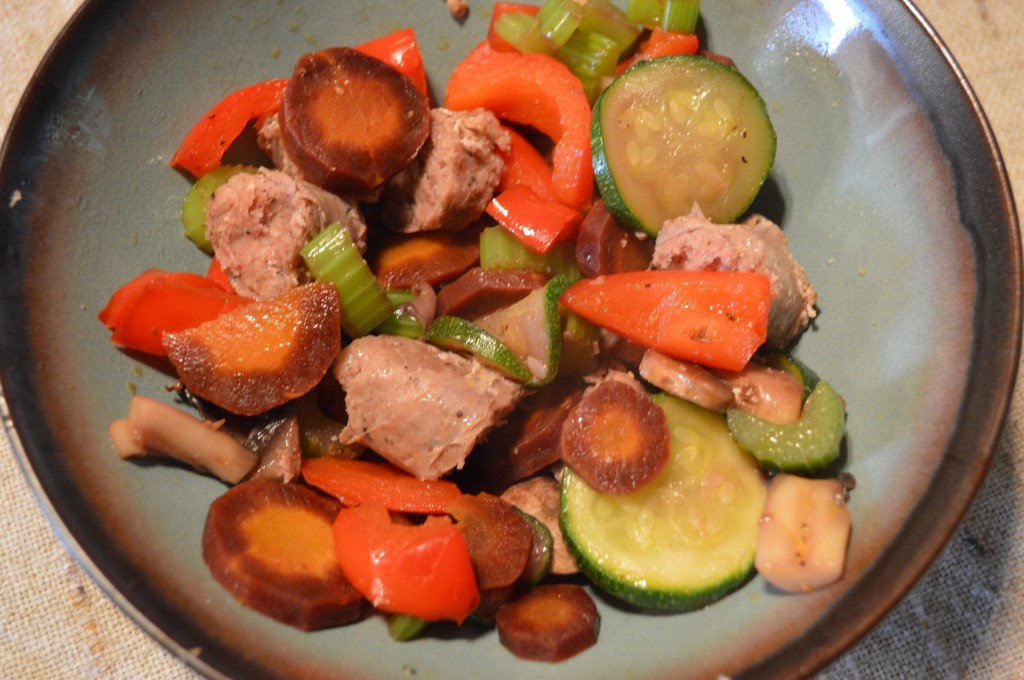 Honestly, it was one of the best dinners we’ve had in a long time.

I just cut up all of the vegetables (pepper, two purple carrots, three stalks of celery, a handful of mushrooms, zucchini) and sautéed them in sea salt, pepper, and olive oil. We mixed in some of our grass-fed bratwurst and our taste buds were dancing. It was an explosion of flavor.

This nutritional rainbow doesn’t have to be just for dinner either. Check this post and this post for quick, easy, colorful breakfast ideas.

Are you eating the rainbow? Check out this chart that the Institute of Functional Medicine created to get more ideas of how you can incorporate the rainbow in your diet. 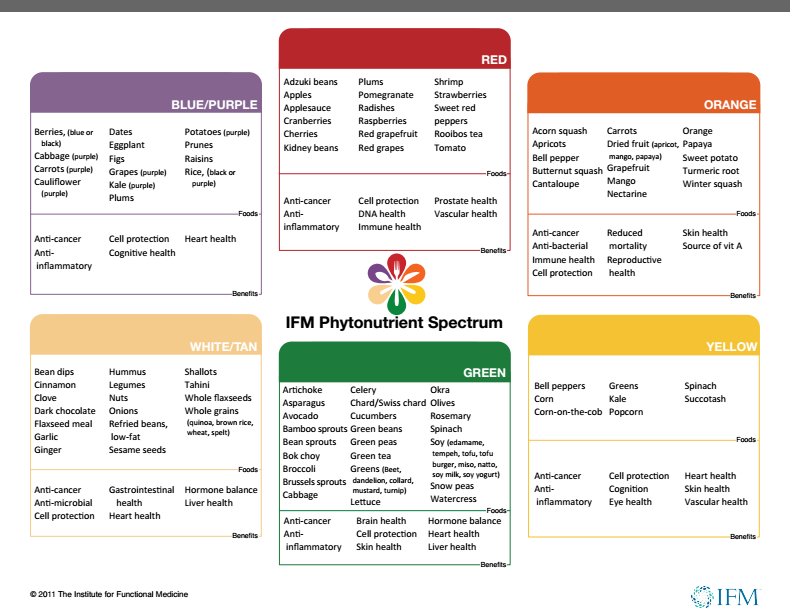 What color are you lacking in your diet?

What new food do you want to try?

Let me know in the comments!