Are you ready for some football?!

America’s most popular sport is back, and we couldn’t be more excited. That shouldn’t come as much a surprise, seeing how 64% of Americans watch the sport on a weekly basis.

Remember, make sure to better enjoy your games by downloading the Fitness Football Pushup Challenge Score Sheet to you phone or computer for FREE — By Clicking the button below… 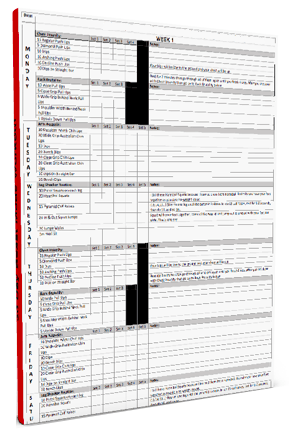 Now, during Football Sundays, you may not be thinking a whole lot about exercise. But what if you could get a decent workout while watching football, AND punish your friends with push-ups for your amusement?

The rules are simple: you’ll be handing out and receiving push-ups as a result of your favorite team’s performance. So if you’ve got a bandwagon fan in the group, make them settle on a team before you get started.

You can do this if you’ve got any number of people together, all rooting for different teams. Just keep track of what your team does, and hand out the punishing push-ups with no mercy. And if you’re by yourself, just follow along and perform the specified push-ups for your team’s mistakes. Everyone can play!

Hey, let’s be realistic: a lot of people can make some really unhealthy choices throughout the course of watching the games. May as well get the blood pumping and have a little fun doing it, right?

Negatives (or for single-player game):

Other team scores touchdown:
Let your opponent into the endzone? You’ve got to do better than that! Do 15 push-ups.

Team commits turnover:
You’ve got to win the turnover battle! That’ll be 10 push-ups.

Defense allows first down:
Stop the offense from marching down the field! But first, 5 push-ups is owed.

Team goes 3-and-out on offense:
You can’t even move the chains? Head back to the sidelines and perform 5 push-ups.

Team punts:
5 push-ups — tell your offensive coordinator to stop being so conservative on 3rd down!

Team misses field goal:
That was 3 points for crying out loud! That could be the difference in the game! Knock out 10 push-ups.

Team flagged:
Offsides? Illegal contact? Horse collar? If the penalty is going against your team, you owe 7 push-ups.

Team loses challenge:
OK, so maybe it looked like the other running back’s knee was down short of the first down marker. But if the ref under the hood says otherwise, pick up the red flag and do 5 push-ups.

Team gets safety:
Unacceptable. Get out of the pocket and get rid of the ball. 10 push-ups while your team punts it away on the kickoff (which always looks weird).

Offense loses yards on play:
The defense read you like a book! Throw something at them they aren’t expecting next play. Until then, drop for 3 push-ups.

QB sacked:
The pocket may have collapsed, but that internal clock has to be ticking. Get rid of the ball! And while you’re on the turf, do 6 push-ups.

Positives (for two players or more):

Running Touchdown:
Way to punch it in! Give 15 push-ups to someone with a weak front 7.

Passing Touchdown:
The league’s rules are more sympathetic for quarterbacks than ever these days. Still, a good QB is hard to find. So reward yourself by giving 10 push-ups to someone.

First down:
Picking up 10 earns you 5 push-ups to hand out.

Field goal:
Kicking a lemon-shaped ball over 11 guys through a pair of uprights is no easy feat, so give away 7 push-ups.

Team forces turnover:
The team that wins the turnover battle usually wins the game. Until then, you win 8 push-ups to force upon a friend.

Safety:
Is there anything more deflating to the other team than yielding a safety? We don’t think so! 8 push-ups is a just reward.

Defense tackles for loss:
This defense is working hard to get off the field. Give a mate 5 push-ups to show you appreciate their effort.

Defense sacks QB:
Well goodness knows you can’t hit those guys too hard, but if you bring down the QB behind the line of scrimmage, hand out 6 push-ups.

Team wins challenge:
His feet were clearly in bounds. Give 5 push-ups for being so right.

Refs blow a call for your team:
As you know, the refs are out to get your team and always have been. So if the broadcast team agrees that the officials misjudged a call that should have gone in your favor, give 3 push-ups to balance out the injustice of it all.

Awesome touchdown celebration:
Lambeau Leap from a Green Bay receiver? Cam Newton’s Superman? A solid Gronk spike? The league may be cracking down on showboating, but if you pull it off, you’ve got to reward that kind of passion. And by reward, we mean punish one of your pals with 8 push-ups.

Team winning at halftime/end of game:
Big players make big plays in big games. If you’re taking a lead into halftime or secure the victory at game’s end, you can give away your point differential in push-ups. So if you win 42-3, that’s 39 push-ups for one lucky player. We guess Gary will think twice before eating the last buffalo wing next time, won’t he?

Add your own ideas!
You’re free to add any rules that will make your challenge more fun. Think seeing a truck commercial deserves more push-ups? Should your friend be punished when his coach throws his headset? Maybe everyone drops down for ten every time you see a Peyton Manning commercial (get ready to be sore)? It’s up to you.

Hopefully you accept and enjoy this challenge all throughout the season. This is a way to make fitness fun and squeeze it in at a time where we’d otherwise be fairly immobile.

Here’s to another great season of America’s favorite game!