The Handstand Push-Up (Master The Most Difficult Bodyweight Exercise)

We don’t really believe in exercising in order to try to impress people. We like to leave that for other people.

Calisthenics is not about mastering bodyweight exercises to garner attention. Sometimes with certain maneuvers, though, it comes with the territory. One such maneuver is the handstand push-up.

The handstand push-up is an immensely difficult bodyweight exercise that takes practice and complete body control –in other words, not something to try on a whim during your lunch break. To be able to execute one correctly is to show your level of discipline in bodyweight training.

Arnold Schwarzenegger was a big fan of them.

We’ve already discussed how they can be a great substitute for dangerous shoulder presses, but there’s more to be said and seen about this exercise.

You may have seen Ryan Gosling cranking out a few reps next to Steve Carell in Crazy, Stupid Love (which, for the record, we find to be a delightful romantic comedy). 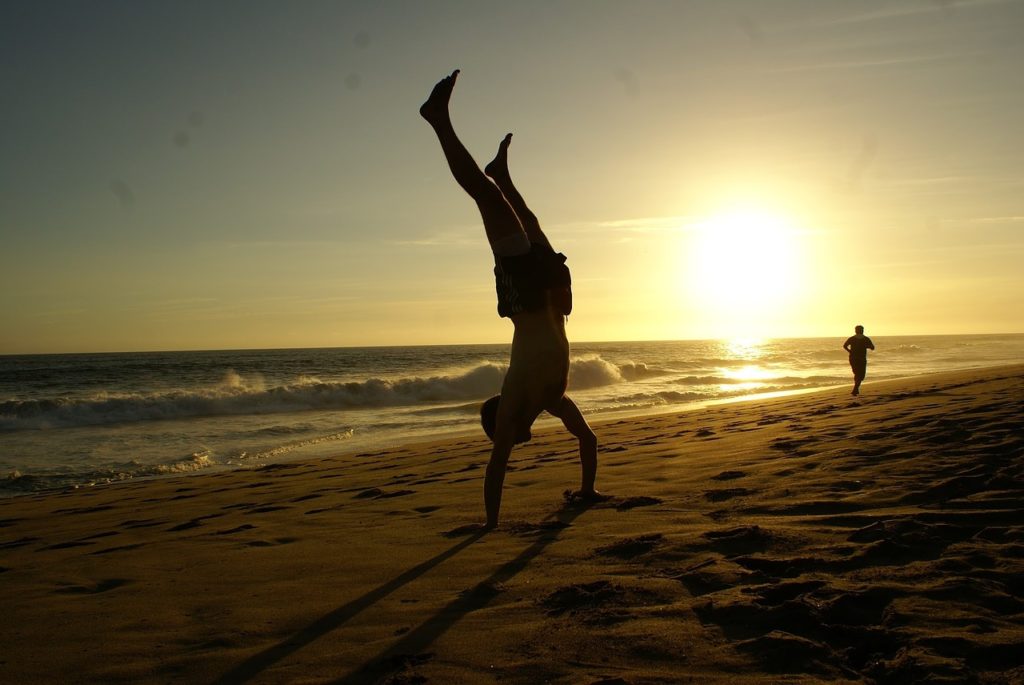 The main character in the 2009 film Ninja Assassin did them on a bed of nails. LEGAL DISCLAIMER: We could not more emphatically ask that you don’t try this.

And anyone who’s seen Con Air remembers Nicolas Cage doing handstand push-ups in his jail cell. We couldn’t find a clip of that to share, so enjoy this Con Air moment instead.

Handstand Push-Up From the Pros

Handstand push-ups have been a fixture in high-difficulty fitness challenges for decades. When Jack Lalanne was 40 years old, he challenged himself to outrageous feats of physicality in order to call attention to his crusade of getting healthy. Lalanne was able to do 100 handstand push-ups in under six minutes. Keep in mind that 100 regular push-ups in that span isn’t exactly a cakewalk.

Here’s what some of our favorite calisthenics experts have said about handstand push-ups:

“The handstand push-up is a great feat of strength and balance. When you see a person do a few consistently and smoothly, you know they’ve put a lot of hard work into their training.“  – Ryan Hurst, co-founder of Gold Medal Bodies

“Barbells and kettlebells are great for pressing, but no matter how strong you are, handstand push-ups are a unique challenge and must be treated as such.” – Al Kavadlo, author and lead instructor for Progressive Calisthenics Certification.

“Handstand Push-Ups (HSPU) are one of my most favorite movements and when done correctly it will not just work the major parts of the body but also build extreme power.” – LittleBeastM.com

The handstand push-up mainly activates the shoulders–particularly the deltoids, trapezius and rhomboids–as well as the triceps.

The cool thing about doing push-ups while looking down at the sky is you get to work more muscles as you work to keep you balance, particularly your forearms and biceps. Your arms’ weight load is increased when compared to regular push-ups as they hold most of your body weight.

Your core also stabilizes your body so your handstand push-up doesn’t turn into a tumbling routine. And balancing your body will make a stronger exercise for your wrist flexors and legs than standard push-ups.

Other than looking pretty cool, there are a number of benefits to mastering a handstand push-up. For one, you’ll build great shoulder strength. But again, you’re putting almost all of your weight into the exercise, so you’ll see results in more places than your shoulders.

Shoulder workouts permeate results for the rest of the upper body, partly why Chris Hemsworth opted to focus on shoulder exercises when he was preparing to play the strongest Norse god this side of Stan Lee’s pile of money.

They’re certainly more challenging than a normal push-up, sure, but there are serious advantages to learning them.

You’re also going to strengthen your core and glutes, as well as improve your balance.

And again, if you’re new to the exercise, it’s probably going to take at least a few weeks, if not more (it took GMB Fitness co-founder Ryan Hurst three months).

Like many other Crossfit movements, opinions about the safety of the kipping HSPU are mixed.

Video by Barbell & Me

Most people would argue a true one arm handstand push-up has never been done, but some people have come close.