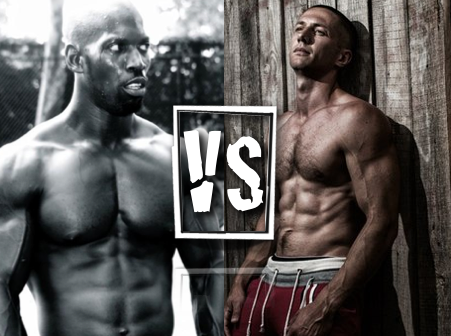 Within every sport, competitors have the ability to compete against each other to see who is the best. In the world of Freestyle Calisthenics, this is not the case. The Freestyle Calisthenics Movement is building momentum with the popularity of bodyweight experts like Hit Richards, Hannibal for King, Denis Minin, Al Kavadlo, and many others. However, to date, there is no National (or World) organizer of such events. I think this would be sweet.

Two of the greatest calisthenic masters are Hannibal For King and Denis Minin. Both of these guys seem to defy the laws of gravity. They can perform front levers, planches, and muscle ups without break a sweat.

But… who is better? If we were to put one against the other in a Freestyle Calisthenic Competition, who would win?

This article is my best attempt to answer this question.

Tale Of The Tape: 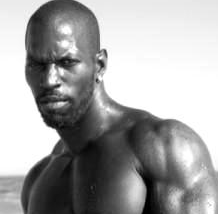 Hannibal For King – AKA “The Humble Android”

How Many Days A Week Does He Train: Every day

Hannibal is a beast. He has the body that most men dream of. The control over his body is insane. He stays true to body weight exercises only. He has a great philosophy to competition. He states in one of his videos that he is open to competition, however, it doesn’t matter who wins or loses because both people are working out. So in reality, both are winners. He strives to be as healthy as he can be.

What Motivates Hannibal? Hannibal is motivated by inspiring others. In one of his videos he clearly expresses gratitude for all the “likes” from people that he is inspiring around the world.

How Does Hannibal Warm Up?


In the video above, we see that Hannibal is no slacker. Warm up moves for him are full workouts for the rest of us. He does:
Close Grip Pull Ups with Parallel Legs
Muscle Ups Off Parallel Bars
Quick Dips
Close Grip Pushups

How Does Hannibal Build Amazing Triceps?

Remember that all of these exercises are solely body weight based.

Its clear that Hannibal has amazing abs. How does he get them? Here are some of the exercises:
Pull Up with Leg Flutters
Pull Up with Kicks

Interesting to think about how he trains abs. He says in one of his videos that he always focuses on abs, whether he’s doing pull ups or whatever… he’s always engaging the abs. I think there is a huge lesson for all of us from this statement.

What Is Hannibal For King’s Diet?

Hannibal states in the video above that he doesn’t follow a diet. He basically eats whatever he wants, including junk food. He states that he uses it as motivation to push him to work harder so he can “work it off”. 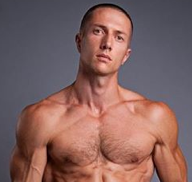 Denis is insane when it comes to body weight calisthenics. He is the “Michael Jordan” in Ukraine. He frequently organizes street competitions for youth in Ukraine through his organization Street-Workouts.org. His mission is to get kids off the street and inspire them to make something of their life.

Below is a picture of just a few of the many lives he has changed.

What Is Denis Minin’s Take On Nutrition?


Minin is totally against using supplements or protein powders. He relies on real, clean food and is committed to spreading this message. How does he develop such an amazing body? Here is just part of his meal plan:
Unprocessed Buckwheat (make sure you soak it for a few hours before cooking)
Millet
Unpolished Rice
Whole Wheat Pasta
Walnuts
Cashews
Almonds
Pumpkin Seeds
Dates
Dried Apricots
Prunes
Raisins
Bananas
Fermented Baked Milk (Huh????)
Kefir
Yogurt
Bryndza (Sheep Milk Cheese) – high in protein
Quail Eggs – Where can I get these!?
Meat (Pork, Beef, Duck & Chicken)- Only baking, no frying because it denatures the protein
Meatballs with Oatmeal (Yikes! Sounds like a Ukrainian thing.)
Potatoes

How Does Denis Minin Workout?

There are a ton of great videos of Denis Minin working out. The above is just one of them that shows his workout routine. Please excuse the language in the video.  In it, he does an assortment of exercises including:
Ladder Climbs w/ Weight
Windmill Pull Ups
Archer Pull Ups
Toe Touches Above Bar
L Sits On Bar

So Who Would Win In A Freestyle Calisthenic Competition?

Of course we will never know until they both competed. And since few calisthenic competitions exist so we don’t even know the rules or if there would be different weight classes, etc… its hard to judge. On one hand, Hannibal is a monster and has tremendous control over his body. Minin on the other hand, shows us that he can do some sweet exercises with a 55lb weight vest.

So who would win?

If there were a competition that judged all levels of calisthenic work including not just below the bar but also above the bar, meaning handstands, etc. I would vote for Minin. I’ve seen some awesome stuff where he does great moves above the bar. Hannibal is strong but doesn’t seem as agile and flexible. Minin is strong, quick, creative and exceptionally fun to watch.

I vote for… Denis Minin!

*Who Would YOU Vote For?