The world of health and fitness is full of gimmicks and snake oil. They’re marketed to the public as a shortcut on the path to your dream body, and they range from questionable to ludicrous to what is essentially a $250 hula hoop.

Whether you’re trying to bulk up or slim down, there is no substitute for hard work and a balanced diet, period. But the most notorious way in which people try to fast-track getting massive muscles is the use of steroids. They come in many forms, but the bottom line is that they are extremely dangerous, and that is no joke.

And if you think the use of steroids is something to be taken lightly, just ask Lewis Brown–a man who almost cooked his insides to death–because of steroids.

Brown, 25, decided he’d try to get in better shape by frequently going to the gym. Admirable, but he soon fell victim to the allure of steroids like so many before him.

“I was so out of it about getting bigger that I thought I was unstoppable,” the lab worker says. “I just wanted to be better than anyone else.”

Family and friends became concerned with Brown’s change in attitude, and Brown himself says he ignored his suddenly hot temper and aggressive behavior. He continued to work out constantly with the aid of the controversial DNP pills.

DNP, or 2,4-Dinitrophenol, is a drug that was first utilized for weight loss in the 1930s. Its other uses include being an antiseptic in herbicide and, in World War I, was used to make explosives. If it sounds like the absolute last thing you should put in your body, it is. Don’t use it. Ever.

But Brown, obsessed with getting bigger and stronger, ignored this.

“I remember seeing a story about DNP and people who died and just thinking they weren’t taking them right.”

In July of last year, after taking eight DNP pills in one day (the exact amount that killed a 21-year-old woman just months earlier), Brown could sense his body temperature rising rapidly and drove himself to the hospital.

“My body was just heating up and cooking from the inside out,” he recalls.

Doctors ordered him to drink a charcoal-based drink in an effort to absorb the chemicals. When that didn’t work, Brown was induced into a coma, and his relatives learned how serious his condition was.

“The doctors told my family I could have just two or three hours to live, and that I wouldn’t make it through the night … They all thought that was it.”

Miraculously, Brown pulled through, but not without paying a price. Doctors were forced to cut a muscle out of Brown’s leg, which had already died.

Brown, who doctors say is lucky to be alive, is recovering well, but not taking his remarkable recovery for granted.

“I’m getting back to my old self. My family are really relieved,” he said.

And while fitness remains a priority to him, Brown has learned his lesson on dangerous supplements.

“I’m going to go back to the gym because I like to keep fit, but I’m never touching pills or steroids ever again.” 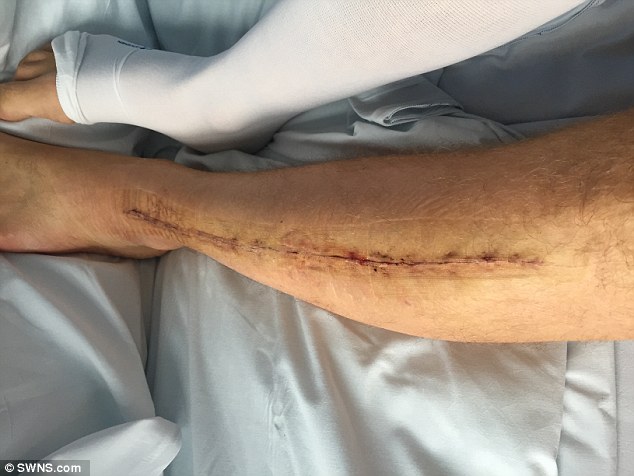