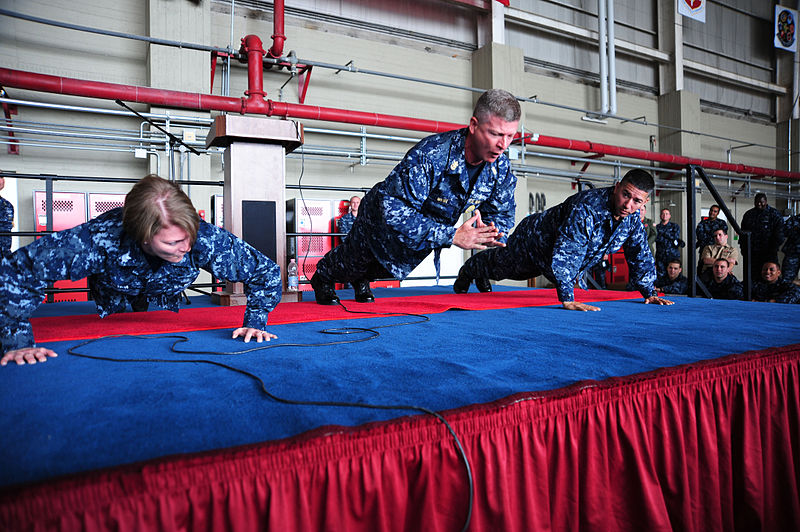 Push-ups are part of the foundation of calisthenics. They’re essential for building muscle in the upper body, and much safer than using a bench press. If you put a serious focus on your push-ups, you can start to see results in a short amount of time. Check out this guy, who did 200 push-ups a day for 30 days, and the results were a noticeable difference in size and definition in his upper body.

A lot of people know push-ups only for their chest benefits, but they’re also great for your triceps, deltoids, and core.

Push-ups can be a great motivator, no matter how you use them. Just last week, it was reported that the Tennessee Titans are rolling out a new discipline system for their training camp, where if one player commits a penalty, they have to watch the rest of their team do push-ups as punishment.

The problem, though, is that after a while, the standard push-up can get a little, shall we say, dull? It’s not the push-up’s fault; we just get too used to the routine. But then what should we do?

Well, if you’re serious about getting a toned, lean body that is build with solid muscle, you need to mix it up a little bit! And we’re going to do that with the classic push-up. But we have to be careful here. Sometimes adding a new twist just for the sake of keeping things fresh has terrible consequences. So we have to make this good (no pressure).

And in order to do that, we’re going to show you some awesome plyometric push-ups that are sure to kick your workouts into another gear!

Now, if you’re unfamiliar with plyometrics, or just don’t have a lot of experience with them, that’s alright! This is a great place to start. Plyometrics (or “plyos”) are known as “jump training”, in which muscles exert maximum force in short intervals of time, with the goal of increasing power (speed-strength).

There are a lot of good reasons to utilize plyometrics, which we’ve outlined here. And one of those reasons is, as we’ve already discussed, to prevent boredom. For bodyweight training, it’s a great way to add a challenging and fun element to many different workouts. But you’re also going to increase your strength and power, boost the efficiency of your neuromuscular system, and in general become more athletic. That definitely sounds like it’s worth giving a try!

Below are six videos detailing our favorite plyometric push-ups. As you’ll see, not only are these much more interesting than a standard push-up, they’re also much tougher. Don’t be discouraged if these are exercises you don’t get on your first try. As a matter of fact, that’s a good thing! What better way to break the monotony of an exercise you’ve mastered than by adding some difficult elements?

As always, you want to practice caution with these variations. You’ll be exerting a lot more energy than with normal push-ups, so make sure you’re stretched and hydrated. And if you’ve got some plyometric push-ups you use to further your calisthenics training, be sure to let us know about them in the comments!