Any Open-Mic Night comedian can tell you a million ways men and women are different. You know the routine: Men don’t ask for directions. Women take too long to get ready. He just wants to watch sports and she just wants to shop. Comedy is hard.

We recently did an article on pull-ups that included a bit about the abilities of men and women in regards to the exercise, which got us some feedback. So we wanted to look deeper into the subject and find out why some research suggests women can’t do pull-ups as well as men, and if there is any evidence that may suggest otherwise.

The first study we found came from the University of Dayton, which conducted a study where 17 normal-bodied women who couldn’t do one pull-up were trained to develop the primary muscles necessary to the exercise (mainly the bicep and the latissimus dorsi, the large back muscle). Three days a week for three months, the women developed their bicep and back muscles while using an incline to practice modified pull-ups.

On test day, the women were found to have increased their upper body strength by 36% and lowered their body fat by 2%. And as for the pull-ups? Well, it wasn’t the screaming success for which the researchers had hoped. Only 4 of the 17 could do even one pull-up.

Why so little success after such rigorous training, as well as what seemed like outstanding results in strength improvement and fat loss? 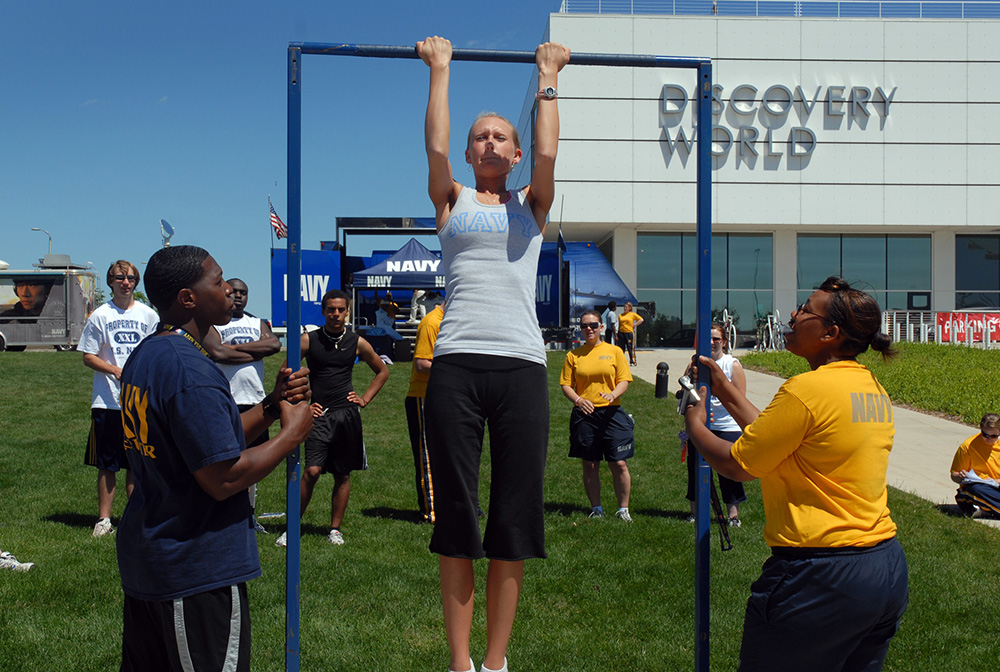 Women have lower testosterone levels than men, meaning they build less muscle during exercise, according to Paul Vanderburgh, a professor of exercise physiology and associate provost and dean at the University of Dayton, and an author of the study. He also said each genders’ lowest possible body fat percentage (around 10% for women and 4% for men) make pull-ups inherently more difficult for women.

Tim Hewett, director of research in the department of sports medicine at Ohio State University Wexner Medical Center, says it’s because women have less muscle mass altogether in their upper extremities. According to Hewett, MRIs show women have 40% less muscle mass than men, meaning their upper bodies are only 50-60% as strong as a man.

Pull-ups actually sit at the heart of the debate about whether physical requirements for front line military service should be equal between men and women.

The Marine corps planned to set a new standard a few years ago requiring that, in order to pass boot camp, men and women were required to perform at least three pull-ups. The results were again disappointing: less than half of the female trainees could do the minimum three, while men passed with ease. That standard was quickly scrapped thereafter.

But that doesn’t mean women in the Marines are just giving up — far, far from it. 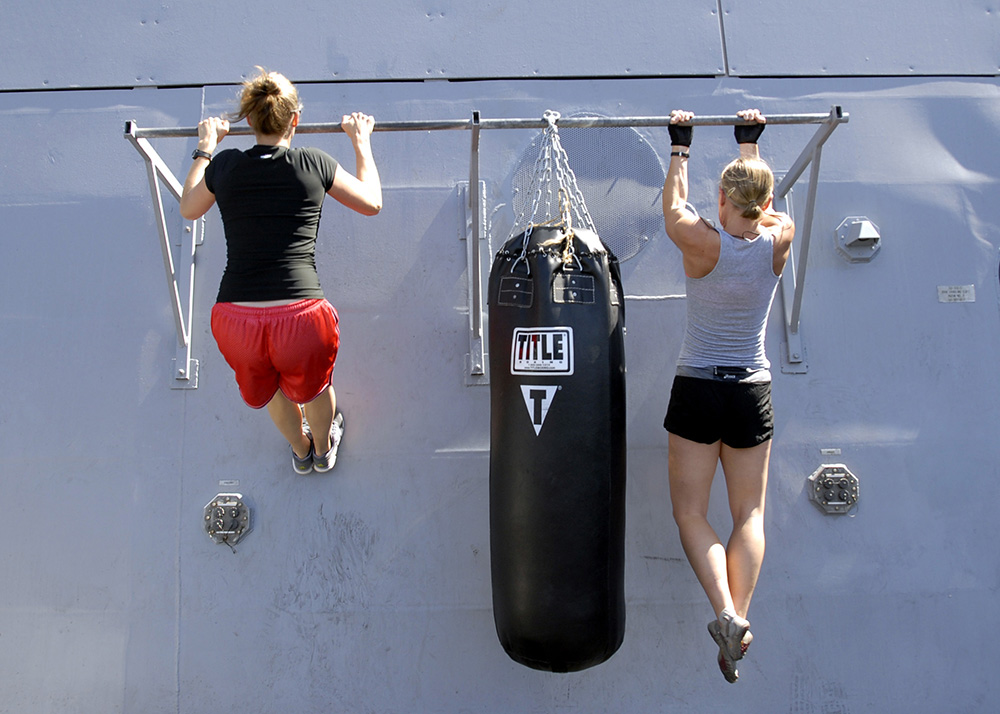 Marine Maj. Misty Posey has been working with both men and women to improve their pull-ups, with her program designed to get people from zero to twenty pull-ups. And she doesn’t buy into the idea that some people (namely women) simply cannot do pull-ups.

“I haven’t met someone yet that I haven’t been able to train to do a pull-up,” she says.

She developed her program as a means to show women the proper way to build the necessary muscle for pull-ups, which garnered attention from her higher-ups. Her programs are now shared online for anyone to view. But the secret, she says, isn’t that secret.

“The way you get good at pull-ups is to do a lot of pull-ups,” she told Marine Corps Times. “You don’t have to tear your muscles down, make them sore and make them bigger to get pull-ups. You just have to train the motor patterns. Your central nervous system needs that constant repetition.”

But some people think the reason women have trouble with pull-ups goes beyond beyond basic biology.
Caitlin Constantine of The Huffington Post suggests women too often conform to society’s standards of what a woman should look like, perpetuating a cycle of “sexualized female weakness”.

Whether biological or abstract, it does seem that women have some disadvantages when attempting a pull-up. But they also have some things working in their favor.

In the aforementioned Ohio State University Wexner Medical Center study, Hewett also said women have 80-90% the lower body strength men have, and more endurance than men overall. That, coupled with studies that show women have a higher pain tolerance, should be more than enough to compensate for any upper body disadvantages.
Yes, there are hurdles for women that men do not have. So if you are a female, don’t compare your pull-up progress to men. They’re operating with a different set of blueprints, and they may reach their goal before you. Don’t be discouraged.

And while we’re at it, let’s remind everyone not to compare their fitness progress to another person male or female. Competition is healthy and can be a great motivation tool. But you are your own person with your own strengths and weaknesses. As it is with pull-ups, so it is with any exercise.

The bottom line is, we most certainly know women can and do perform pull-ups. We’re proud to say that many women in the Shot of Adrenaline family learn the training to do their first pull-ups right here.

If you want to learn to do a pull-up, you can, and we’ve got plenty of resources to help you. But we are not in the business of excuses. It takes work. You have to be willing to work. If you’ve got that, you’re well on your way.