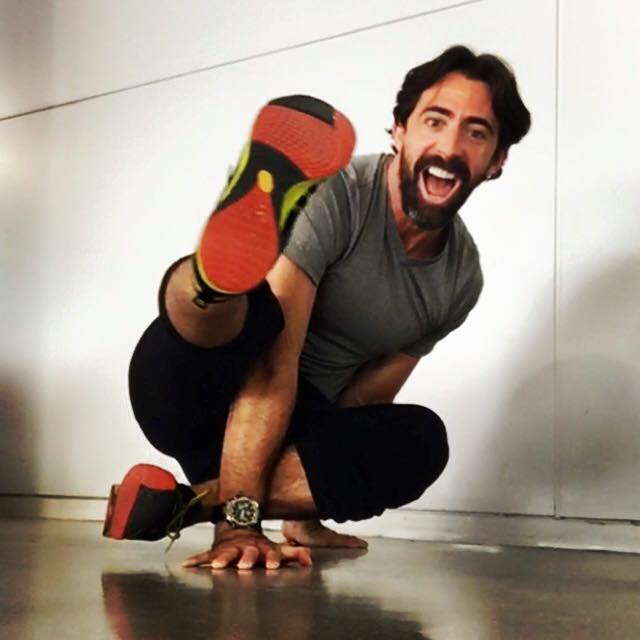 We’ve had the chance to interview Gold Medal Bodies co-founder and program director Ryan Hurst before, and we think he’s a fascinating guy. He’s given great insight and continues to be a big source of inspiration for us as well as the world of calisthenics in general.

Still, a lot of our readers may not have heard of him. But even if you have, there are some great lessons by which Hurst lives his life which we could all benefit from learning.

First thing’s first: he’s not the guy from Remember the Titans. OK, now that that’s out of the way…

The roots for Hurst’s passion for fitness stem from his time spent in gymnastics. He was scouted for the sport by his former P.E. teacher (now mentor and friend) Mark Folger. For ten years, Hurst travelled all over mid-America for competitions.

“I’d been a gymnast all throughout school and loved it,” he told us in 2015, “But a training injury wrecked my knee, and I knew I wouldn’t be able to compete at a high level again.”

“ [I]t was just a stupid thing where I was kneeling with one leg out and a guy fell on top of my knee. The medial ligaments of my knee were torn and I had to get surgery.”

It would be twenty years before he attempted any gymnastic activities again. But a little older, wiser, and painfully aware of how medial ligaments feel when they tear, he gave it another shot when a co-founder of GMB Fitness sent him some gymnastics rings to play with.

“I started training again, going over the basics, and trying to pick up where I left off so many years ago,” Hurst says.

Now, both the practical exercises and training philosophy are influenced by a sport he thought he’d given up forever over twenty years ago.

“It’s funny to me that I’ve returned to the training style that I had when I was a kid!” Hurst says. “After my knee injury, I thought I had left that world behind.”

2) Find A Diet That Works for You

Over the course of human history, diets have gone a little off the rails. And over time, people have come up with some pretty weird diets in an effort to control their weight, ranging from eating cotton balls to avoiding swamps.

Trying to find the definitive be-all and end-all diet can be enough to make you sick (especially if you’re eating cotton balls–seriously, don’t eat cotton balls).

Hurst agrees, which is why he wants you to stop worrying about what experts are telling you and find a diet that suits you and your lifestyle.

In another interview he gave with that super awesome website, Hurt said “The vast majority of your needs can be met by simply eating good foods. I’m not going to say what those are, because you already know. If you want to eat paleo, do that. If you want to do IIFYM, do that. Basically, find an approach that works for your temperament and lifestyle and follow that.”

Hurst recommends you eat enough quality food so your body can recover and get stronger. But he also thinks you shouldn’t cut all the fun out of food.

“[Y]ou have to also be eating things you enjoy so you can keep enjoying it and not give up,” Hurst says. “There’s more to eating than fuel, so just focus on the basics.”

3) Play in Your Workouts

Think back to those simple times at recess in grade school. The bell would ring and you would run out the classroom door literally the moment your teacher couldn’t stand looking at you any longer.

Do you remember what we did at recess? We were running, jumping, tumbling, climbing on stuff … We didn’t think we were exercising; we were just playing. And a lot of the time when Hurst works out, he looks like a kid on the playground.

Remember how Hurst got back into gymnastics after two decades away? Well, it wasn’t just the training itself that sparked something, but how much joy he was getting from it.

“As I was playing around and enjoying my training,” he says on his site,  “a lightbulb turned on in my head, and I realized that it was possible to do ring training and make improvements without having to commit to hours and hours of intensive training.”

It was this revelation that helped lead him to the foundation of GMB Fitness and its core philosophies.

In short, you need to have fun when you exercise. Play around. Have a good time. Otherwise, it becomes like a job, and then you’ll do anything to get out of it.

4) Remember why you’re working out

We all have our reasons for exercise and getting healthy. Some people want to slim down before a high school reunion, or bulk up so they can bench 300 pounds. But according to Hurst, such motivations can only last for so long.

“Eventually you need to be clear about your WHY – you need to identify your purpose for training, and what that means to you,” Hurst says. Often, it’s much deeper than just a good physique or bragging rights.”

Hurst says he trains for his family. He’s inspired by learning how he can be a better person and father. So when he was learning the gymnastic rings, and realized he wasn’t able to do things he executed as a teenager, a part of him wished he could have another couple hours a day to practice so he could get it right.

“Then I realized how silly that was!” he admits. “I’m not a competitive gymnast anymore. I’m a dad and I have much more important priorities in my life. Spending 6 more hours a week to try and get a perfect 10 on a routine is just not what’s its about anymore.”

This is so important to remember, especially for calisthenics trainers who are exercising for much more than physical gains.

“I’m inspired to do things that will keep my body healthy for decades to come, so I can care for my family and live to see my grandkids.”

So work hard and push yourself. Just remember what the bigger picture is for you. For Hurst, it’s a lot less about getting shredded abs and a lot more about giving piggybacks to his kids.

Hurst’s life story is basically an anthology of undertaking one big challenge after another. And in these challenges, he’s found different lessons he carries and passes on to his students.

He tells the story much better than we can. But each time he learned a new approach to training, or something to do with health, or a different philosophy, he applied to his everyday life as well as his teaching.

In fact, Gold Medal Bodies was inspired in part by how much fun he was having with gymnastics again and how he thought that would be an exciting new avenue for training.

“[A] lightbulb turned on in my head,” he says, “and I realized that it was possible to do ring training and make improvements without having to commit to hours and hours of intensive training.”

As if all that weren’t enough to hang his hat on, he decided on the first day of 2013 it was about time he learned a one-arm handstand. So he got in touch with bodyweight expert Steve Atlas to coach him.

And where some coaches would think they were above asking for direction, Hurst’s life experiences had taught him better.

“You know, because I’m a coach, I understand that the best way to do it is to do it right” he says, “instead of just trying to do it your way because you’re a coach and you think you know everything … and it was wonderful!”

The process, he says, actually helped him in his own coaching techniques.

As for the one-arm handstand, it took him three months to get there. And he’s still learning ways to get better.

So for all the knowledge and training you’ve accumulated thus far, don’t sit on your laurels. Take it from Hurst and keep pushing to get better.