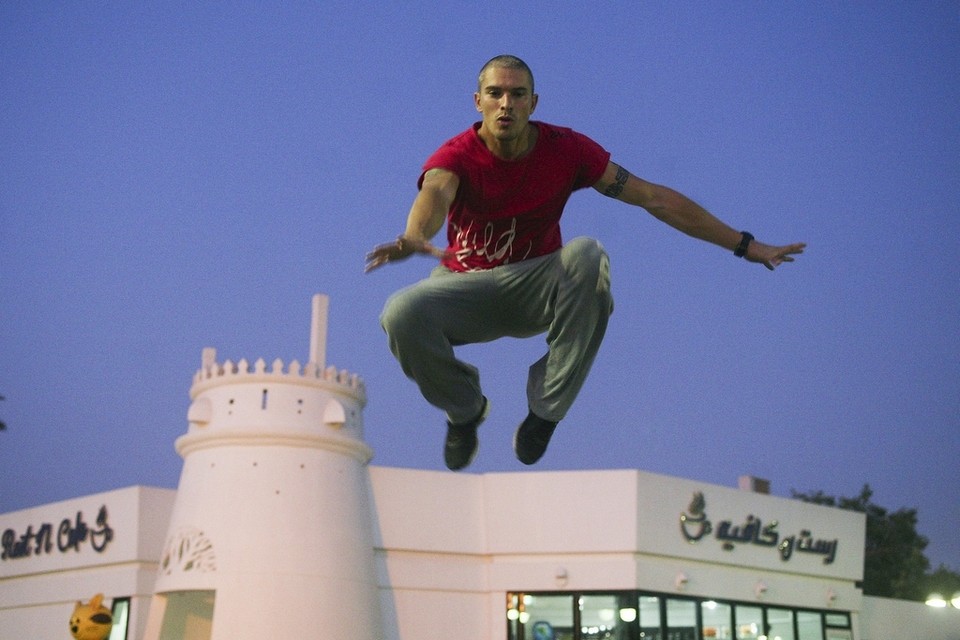 At Shot of Adrenaline, we have a deep respect for the sport of parkour. In fact, we admire it … from a safe distance.

Hey, we’re not parkour experts. But in a lot of respects, parkour is a younger cousin of calisthenics, both in the physical discipline and mental stability it requires. To not take that seriously can yield very bad results. (This is normally where we’d link you over to a “parkour fails” video, but they all look stunningly painful. And we’d like to keep this upbeat.)

But those who are parkour veterans will tell you it’s really not that dangerous or difficult to understand. And with enough practice, you can train your body to do things you never thought it could — see why we like it?

The key, though, is it takes practice. You can’t just decide to become a parkour athlete one day and jump off a truck when you should be selling paper.

Parkour has been around as long as there have been things to jump over, climb up, and balance on. The term itself derives from parcours du combattant, a military training method developed by French naval officer Georges Herbert that focused on obstacle course-style training.

Herbert got the idea from indigenous African tribes he met, of whom he noted, “ Their bodies were splendid, flexible, nimble, skillful, enduring, and resistant but yet had no other tutor in gymnastics but their lives in nature.”

Parkour began to grow from Herbert’s early developments, but it hasn’t been until the last decade or so that parkour has begun to grab some share of the spotlight in athletic mainstream culture. Part of that credit goes to a fellow Frenchman of Herbert, Stephane Vigroux.

Vigroux was a parkour pioneer in the 90s and has become an icon in the sport today. He’s led a crusade to legitimize the parkour movement for all the right reasons, shying away from using it for fame and fortune and instead keeping the focus on physical and mental growth.

What would our teenage years be without a heavy dosage of seemingly perpetual angst? We can all fondly remember the age of adolescence, storming up to our room and shutting out a world full of people completely ignorant to what we were going through. Well, Vigroux was no exception.

He describes feeling a sense of being lost in life and looking for an answer that strayed away from convention.

“I was quite an unhappy person, and I didn’t really know what to do. I just knew that … going to school and following the normal path wasn’t inspiring me.”

And then, seemingly out of nowhere, parkour came along and took him by storm.

“[S]eeing the movement, just visually seeing what the human body can do and achieve in a certain space just really touched my heart and inspired me.”

Vigroux was intrigued. Parkour was fresh, new and challenging, and it seemed to fit his true, albeit abstract, aspirations.

And if he was going to avoid a career plagued with a frequent diagnoses of a case of the Mondays, he decided he needed to train with the best. So in 1998 he joined one of the true founders of modern parkour, David Belle.

Though as Vigroux tells it, “joined” may be the wrong word.

“My first years of training were very intense as David didn’t have the time or patience to be teaching anyone,” he recalls. “When I first met him, his words were clear: ‘Follow me if you can but I do not have time to train people. If you can keep up, then all good, if not, find another thing to do.’ “

It was a learning environment that would have made Charles Darwin proud: Sink or swim. Survival of the fittest. Vigroux had to keep up with one of the best in the world, or get left behind

Well, who’d have thought, but when it came to jumping over railings and balancing on ledges, the kid had a real knack. Vigroux quickly became one of the trailblazers of parkour with Belle. But notoriety did not come without lessons.

“One thing I [learned] very early on when I began my parkour journey was to think twice before I open my mouth,” he writes on his website. “Before, during and after training. Anything could be challenged and tested right on the spot.”

This was most certainly the case when Vigroux met the Yamakasi, Belle’s original core group of parkour developers.

“It was new, it was interesting, very intense in many, many ways: physically, mentally … I was just amazed at how far someone can push [themselves].

“Not being naturally gifted or strong, I had to double my training hours daily to be able to catch up with the rest of our Les Traceurs group at the beginning,” Vigroux says. “Every single day was clear and simple: train parkour, eat parkour, sleep parkour. The game was intense, always flirting with the limits, physically and mentally, so I could learn about myself, so I could grow.”

The Yamakasi challenged many of Vigroux’s preconceived notions on things — namely, what it meant to be strong.

“They put some values behind this word — to be strong. So it started physically, doing challenges.”

Vigroux says they would challenge each other to lift things like cars and trucks, and jumping up various walls. With this came the introduction of a high number of repetitions for everything they did. This repetition assisted with the groups’ movement instincts. Vigroux says this type of training was almost unheard of a the time.

After some time training with the Yamakasi, a second parkour group was formed with Vigroux, Belle and other Yamakasi members called the Traceurs — a French word meaning ‘a group of persons’, The term now refers to a team of parkour practitioners (which Vigroux used to describe the Yamakasi earlier).

After a brief stint in Thailand, Vigroux was called back to Europe to give guidance to some of England’s parkour athletes who seemed to have been straying from the sport’s core values. This was the beginning of Parkour Generations.

Parkour Generations is the world’s largest organization dedicated to the parkour movement. Its goal is “to create a vehicle to transmit the incredibly strong benefits and positive effects of [parkour].”

To get the movement off the ground, Vigroux called on his friends from the Traceurs. He remembers his teammates and he deciding to “do something together, before people do it without the right intentions.”

Parkour Generations now teaches schools, gymnasiums and more in the art of parkour. It is responsible for creating the first recognized qualifications for parkour coaches as well as the first national governing body for the sport in the United Kingdom. Its operations have expanded to Dubai as well.

And since creating Parkour Generations, Vigroux has been allotted the opportunity to travel the world and spread the parkour gospel.

“I have been lucky enough to travel all over the globe to share and teach with thousands of students over the last decade,” he says. “Always looking at giving the best of parkour so people can find a way to improve their lives on many levels, whether it is physically or beyond.”

We suppose that means he has no regrets about not giving an office-centered career path the ol’ college try.

More Than A Sport

In 2008, London hosted the Barclaycard World Freerun Championship (‘freerun’ can be another word for ‘parkour’). The activity that was barely a whisper when Vigroux began studying and training now had its own worldwide competition. Can you imagine how he must have felt?

“I’m not supporting it at all,” Vigroux said in 2009. Not exactly what you were expecting?

“None of us at Parkour Generations or the Yamakasi … none of the founders supported the previous World Freerun Championship. None of us support this. Let’s make it clear.”

Seems a little odd, doesn’t it? What else could an athlete want more than helping bring so much notoriety to their sport that it garners worldwide attention?

For one, he’s not too big on parkour being a competition in the first place.

“It’s a new sport,” he says. “It’s about to be established and recognized, and I don’t think doing a competition right now is the best thing to do with the sport.”

And that’s not really what parkour is supposed to be about anyway, according to Vigroux.

“For the moment, the problem is that we have a misunderstanding of what [parkour] is really. It’s not just about doing a backflip to impress your friends.”

Instead, Vigroux wants today’s students to focus less on the fame and prosperity one can gain from it and more on utilizing parkour as a method by which to better oneself as a whole.

“So we try to keep these values … For us, it’s a school of life. It’s an art where we practice every day. Not only physically, but mentally also.”

These sentiments echo everything our beloved calisthenics is supposed to be about. And Vigroux knows that, at the end of the day, it really doesn’t matter how advanced you become in a physical activity if you’re not progressing as a person as well.

“This is a long journey,” he says. “It’s an everyday war to improve yourself, to be better, to have something deeper. You have to give more effort and … more of yourself. Be honest with yourself, face your fears, and share and help people, and just be human, you know?”

Vigroux continues his training to this day, teaching new students around the world. Parkour is in its infancy; still on its maiden voyage. Though it often only garners attention for its jaw-dropping stunts and cringe-inducing fails, fans of the sport can breathe easily knowing their captain is still keeping their ship right on course.