Four minutes is not a lot of time. Really, there’s not much you can do in that span. Sure, you can forward your coworkers a funny, work-related email. You could watch the hypnotically adorable Duck Song video. Or you could get halfway through that voicemail your mom left you yesterday.

But is there anything you can do in that time that would benefit your health and fitness? Actually, yes. In four minutes, you can get one of the most beneficial and challenging workouts possible!

That sounds crazy, right? A four-minute workout seems antithetical to the entire idea of a solid exercise session. It seems gimmicky, like something out of a bad fitness infomercial.

Well, it’s not crazy (though the type of exercise we’re about to show you is pretty insane), and it’s not a gimmick. We’re talking about the discipline of Tabata training. And we’ve put together 7 fierce workouts that will help you reach your fitness goals by absolutely pushing your body to the limit!

In the past, we’ve covered the basics of High Intensity Interval Training (HIIT) and why it’s so awesome. But if you’re unfamiliar, HIIT is a type of exercise whereby an athlete will go through a circuit of workouts where they exert high amounts of energy in a short amount of time, with little to no rest between sets. This is a great method for maximizing your time and getting the most out of a workout.

Tabata is a type of HIIT workout because it’s designed with the same principles of high exertion periods with very little rest in between. But Tabata takes the idea of HIIT and steps on the gas pedal, hard. 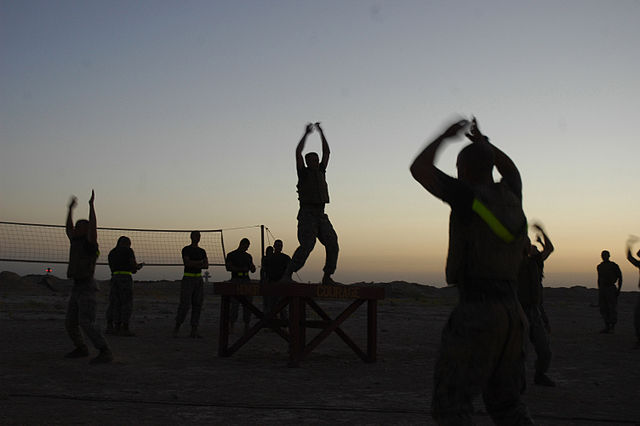 A person will complete 8 rounds of different exercises in a 20/10 format for one complete circuit.

This means a person will work for 20 seconds, pushing themselves as hard as they can. Then the person will rest for a merciful 10 seconds before repeating. If you think that sounds simple, just wait. Eight rounds of this adds up to the longest four minutes of your life this side of a Coldplay song.

The program was designed by Japanese scientist Dr. Izumi Tabata of the National Institute of Fitness and sports in Tokyo. In 1996, he had his team of researchers conducted a six-week study in which two groups would have their exercise progress tracked.

The control group performed longer workout sessions at a moderate intensity level, while the other group implemented the revolutionary new method of 20/10 for four minutes a day. The results confirmed Dr. Tabata’s theory: even though the control group exercised for one hour a day, five days a week — adding up to 1,800 minutes of exercise — their results were not as good as the Tabata group, who increased both their aerobic and anaerobic fitness levels despite only exercising 120 total minutes over the six-week study.

It’s been shown that a 2:1 work-rest ratio (i.e. 20 seconds work, 10 seconds rest) does not give the body enough time to recover fully, which means eventually during the workout you’re going to hit the wall like an outfielder with poor spatial perception. It’s at this point of utter fatigue that you must push through. That’s what’s going to boost your cardiovascular fitness, resulting in higher metabolism, and improved endurance and strength — all of which leads to lean muscle growth and an increase in fat burning. And trust us, even though they don’t sound like much now, you’re going to treasure those 10-second breaks. Now, this method of exercise was originally only designed for Olympic speed skaters, but now all different types of athletes are seeing its benefits by using different exercises.

Some reports on the subject seem to confuse Tabata with regular HIIT. While it is a type of HIIT, it’s always in keeping with the aforementioned 20-on/10-off x 8 rounds format. So again, following what Dr. Tabata’s group did during the study, the workout should only be four total minutes. It has often been wrongly said that you should do anywhere from 4 to 6 rounds with different exercises in each circuit. That type of circuit is pure HIIT, where Tabata really is just 4 minutes.

That said, there are a couple of options on how you can implement it into your daily routine. You can do it as advertised, with the four-minute workout routine being the only exercise you do all day (outside of normal day-to-day activity). That is certainly an option.

We are big proponents of adding Tabata workout routines to the end of existing workouts. This has several obvious benefits. By now you know it won’t add much time to your total workout, and talk about finishing with a bang! You can add an exclamation mark to any routine you’re doing with this, and it will yield noticeable results, fast.

Please keep one thing in mind: these workouts are NOT for beginners. These routines that follow will push you to the brink of exhaustion, so if you’re not used to intense workouts, do not start here. And if you’re new to working out, you may be interested in our Calisthenics for Beginners program.

And just like any other exercise, you should never compromise form, even if you’re exhausted. Five push-ups done correctly is better than four done correctly and three done improperly.

If you scour the web, you’re likely to come across a few sites that suggest using weights and gym equipment as part of a Tabata workout. That’s both impractical and potentially dangerous.

Regarding the impracticality, if you plan to create this kind of workout circuit with — as some websites advocate — deadlifts, weighted squats and dumbbell curls, you’re either going to need to block off a lot of space for all of that equipment, or you’re going to be sprinting from one end of the gym to the other to get to the next exercise in ten seconds (which isn’t really the goal of the rest period).

We’ve written before how many gym exercises can be unsafe. Adding a small window of 20 seconds for the athlete to go as hard as they possibly can sounds like a dangerous mix, especially if they’re tempted to use anything but a minimal amount of weight.

Now, as you probably know, we believe bodyweight training is the best way to get any kind of workout, but this is why the discipline of calisthenics blends perfectly with Tabata training. There’s no rush to get over to the next machine or pick up the next piece of equipment. You’ll be working and moving your body in different ways, and the only transitions you make are getting into position for the next workout (i.e. push-up position to body squats). It’s the perfect combination!

Warm Up Prior to Each Circuit

It’s important to use dynamic stretches to make sure you’re ready for these workouts. You’re going to be moving around a lot so you want to make sure you’re nice and flexible. Try these exercises to prime your body for the four minutes of intensity you’re about to experience.

Rest for about 60 seconds after completing these warm-ups before moving on to the workout. Now that you’re sufficiently warmed up, we invite you to try these seven challenging workouts. Again, they can be either a stand-alone workout, or added to the end of your existing routine. Either way, you’re sure to be wiping away the sweat when these four minutes are over.

We thought we’d provide a little bit of everything in each of our circuits. You’ll be working some upper body, lower body, core, as well as some intense cardio training that are going to help burn away unwanted fat.

Remember — these are called “extreme” circuits for a reason: they are for intermediate-to-advanced athletes. And even still, pay attention to your what your body is telling you. It’s important to push through those walls that you feel, but if you begin to experience dizziness, nausea, or shortness of breath, stop immediately. Also, remember to keep water handy: you’ll probably be craving it during the rest periods.

Tabata TimerOne more thing! You’re going to be so focused on these extremely difficult workouts, you won’t have any extra energy to keep a running count for each exercise and the subsequent rest. That’s why we’ve added this handy timer just for you to use just for this workout! You’ll hear a sound as each round finishes, so you know when it’s time to rest, and when it’s time to get back to work.

Good luck, and let us know what you think of the workouts!