When it comes to taunting opponents, Conor McGregor is only second to Muhammad Ali.

We said in a previous article that two of the reasons why Conor McGregor is an excpetional athlete are his mental toughness and confidence.  Every trash talker needs those two traits, because sometimes people trash talk back and sometimes you can’t back it up.

But Conor assures us he can back it up.

So while we wait to see if Conor is going to back up the trash talk tonight, here are seven of his best trash talking moments.

Conor takes great care of his look. In fact, one of reasons he’s hunting down those belts is that they would look great with some of his suits.

So when he doesn’t like the way other fighters look, he lets them know it.

“he got wobbled about forty times. His chin is deteriorating. Every single contest he gets in, he hits one knee. A gust of wind and he does the chicken dance.”

Conor watches his opponents previous fights very carefully, not only to devise strategies, but also to come up with insults.

Conor knows how to exploit his opponents mistakes. He ended up getting a taste of his medicine with this one after Nate Diaz accused him of taking steroids.

Conor was never shy to use his height advantage to taunt his opponents in the featherweight division. This one ended up biting him in the rear end when Nate wrote off Conor’s victories as being against “little men.”

“If this was a different time, I would invade his favela on horse and kill anyone who is not able to walk”

Jose Aldo is such a solid fighter that Conor had to go this much over the top to try to get to him.

“Mr. McGregor has said that Rafael is a traitor to his people and vows to “behead the ‘American Gringo’ Rafael Dos Anjos, in the name of La Brasilia!”

Conor is a proud Irishman, so when he senses an opponent is not as proud of his nationality, he pounces on the opportunity. 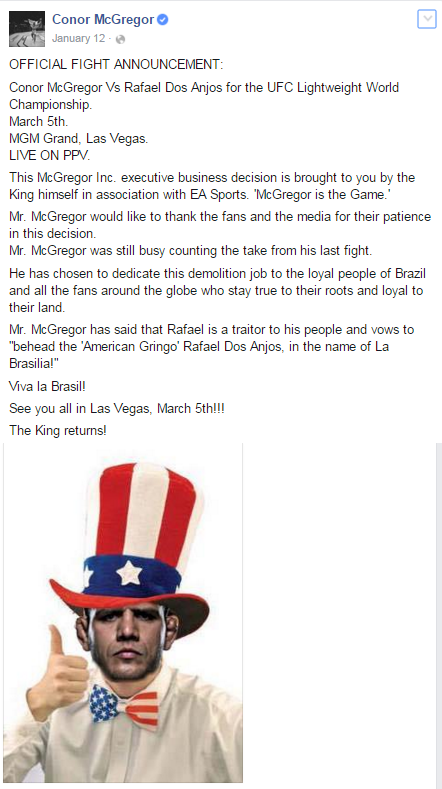 “I like Nick’s little bro [Referring to Nate’s older brother Nick Diaz]. How can you not like him? He’s like a little cholo gangster from the hood. But at the same time he coaches kid’s jiu jitsu on a Sunday morning then goes on bike rides with the elderly. He makes gun signs with the right hand and makes animal balloons with the left hand.”

The Diaz brothers are notorious for being chill, so Conor had to dig deep to get to Nate. Tonight we’ll see if  he succeeded.